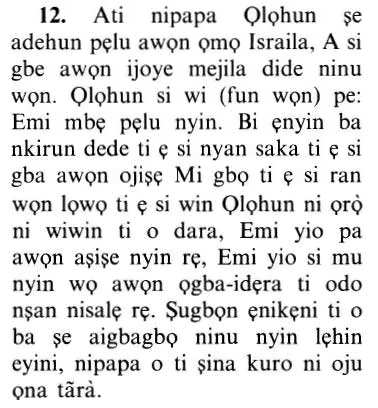 Allah did aforetime take a covenant from the Children of Israel, and we appointed twelve captains among them. And Allah said: "I am with you: if ye (but) establish regular prayers, practise regular charity, believe in my messengers, honour and assist them, and loan to Allah a beautiful loan, verily I will wipe out from you your evils, and admit you to gardens with rivers flowing beneath; but if any of you, after this, resisteth faith, he hath truly wandered from the path or rectitude."
And certainly Allah made a covenant with the children of Israel, and We raised up among them twelve chieftains; and Allah said: Surely I am with you; if you keep up prayer and pay the poor-rate and believe in My messengers and assist them and offer to Allah a goodly gift, I will most certainly cover your evil deeds, and I will most certainly cause you to enter into gardens beneath which rivers flow, but whoever disbelieves from among you after that, he indeed shall lose the right way.
Allah made a covenant of old with the Children of Israel and We raised among them twelve chieftains, and Allah said: Lo! I am with you. If ye establish worship and pay the poor-due, and believe in My messengers and support them, and lend unto Allah a kindly loan, surely I shall remit your sins, and surely I shall bring you into Gardens underneath which rivers flow. Whoso among you disbelieveth after this will go astray from a plain road.

Cursing the People of the Book for Breaking the Covenant

Allah commanded His believing servants to fulfill the promises and pledges that He took from them and which they gave His servant and Messenger, Muhammad, peace be upon him.

Allah also commanded them to stand for the truth and give correct testimony. He also reminded them of the obvious and subtle favors of the truth and guidance that He granted them.

Next, Allah informed them of the pledges and promises that He took from the People of the Book, who were before them, the Jews and Christians. When they broke these promises and covenants, Allah cursed them as a consequence and expelled them from His grace and mercy. He also sealed their hearts from receiving guidance and the religion of truth, beneficial knowledge and righteous actions.

Indeed Allah took the covenant from the Children of Israel and We appointed twelve leaders among them.

These twelve people were leaders who gave the pledge to Allah to listen and obey Allah, His Messenger and His Book on behalf of their tribes.

this occurred when Musa went to fight the mighty enemy (in Palestine), and Allah commanded him to choose a leader from every tribe.

The Leaders of Ansar on the Night of Aqabah

Likewise, when the Messenger of Allah took the pledge from the Ansar in the Aqabah area, there were twelve leaders from the Ansar.

There were three men from the tribe of Aws:

• There were nine people from the tribe of Khazraj:

Ka`b bin Malik mentioned these men in his poem, as recorded by Ibn Ishaq. On that night, these men were the leaders or representatives of their tribes by the command of the Prophet. They gave the pledge and promise of allegiance and obedience to the Prophet on behalf of their people.

with My protection, support and aid,

if you perform the Salah and give the Zakah and believe in My Messengers;

concerning what they bring you of the revelation,

honor and assist them...,

and support them on the truth,

by spending in His cause, seeking to please Him.

verily, I will remit your sins.

and errors, I will erase them, cover them, and will not punish you for them,

and admit you to Gardens under which rivers flow (in Paradise).

thus, protecting you from what you fear and granting you what you seek.

But if any of you after this, disbelieved, he has indeed gone astray from the straight way.

Therefore, those who break this covenant, even though they pledged and vowed to keep it, yet, they broke it and denied it ever existed, they have avoided the clear path and deviated from the path of guidance to the path of misguidance.