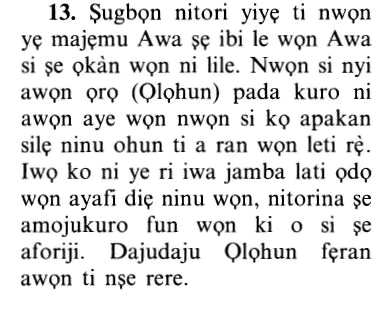 But because of their breach of their covenant, We cursed them, and made their hearts grow hard; they change the words from their (right) places and forget a good part of the message that was sent them, nor wilt thou cease to find them- barring a few - ever bent on (new) deceits: but forgive them, and overlook (their misdeeds): for Allah loveth those who are kind.
But on account of their breaking their covenant We cursed them and made their hearts hard; they altered the words from their places and they neglected a portion of what they were reminded of; and you shall always discover treachery in them excepting a few of them; so pardon them and turn away; surely Allah loves those who do good (to others).
And because of their breaking their covenant, We have cursed them and made hard their hearts. They change words from their context and forget a part of that whereof they were admonished. Thou wilt not cease to discover treachery from all save a few of them. But bear with them and pardon them. Lo! Allah loveth the kindly.

Allah then mentioned the punishment that befell those who broke His covenant and the pledge they gave Him,

So because of their breach of their covenant, We cursed them...,

Allah states, because of their breaking the promise that We took from them, We cursed them, deviated them away from the truth, and expelled them from guidance,

and made their hearts grow hard...,

and they do not heed any word of advice that they hear, because of the hardness of their hearts.

They change the words from their (right) places...,

Since their comprehension became corrupt, they behaved treacherously with Allah's Ayat, altering His Book from its apparent meanings which He sent down, and distorting its indications.

They attributed to Allah what He did not say, and we seek refuge with Allah from such behavior.

and have abandoned a good part of the Message that was sent to them.

by not implementing it and by ignoring it.

And you will not cease to discover deceit in them, except a few of them.

such as their plots and treachery against you, O Muhammad, and your Companions.

this Ayah refers to their plot to kill the Messenger of Allah.

But forgive them, and overlook (their misdeeds).

This, indeed, is the ultimate victory and triumph.

Some of the Salaf said,

"You would never treat those who disobey Allah with you better than obeying Allah with them.''

This way, their hearts will gather around the truth and Allah might lead them to the right guidance.

Therefore, forgive those who err against you.

this Ayah was abrogated with Allah's statement,

Fight against those who believe not in Allah, nor in the Last Day. (9:29)