ALL THE WORLDS - ALL BEINGS, BLESSING, REMEMBRANCE OF ALLAH, MUSA (AS) (MOSES), PROPHETS 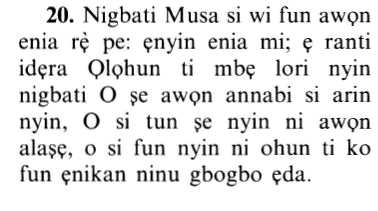 Musa Reminds His People of Allah's Favors on Them; The Jews Refuse to Enter the Holy Land

Allah states that His servant, Messenger, to whom He spoke directly, Musa, the son of Imran, reminded his people that among the favors Allah granted them, is that He will give them all of the good of this life and the Hereafter, if they remain on the righteous and straight path.

And (remember) when Musa said to his people: "O my people! Remember the favor of Allah to you, when He made Prophets among you,

for whenever a Prophet died, another rose among them, from the time of their father Ibrahim and thereafter.

There were many Prophets among the Children of Israel calling to Allah and warning against His torment, until `Isa was sent as the final Prophet from the Children of Israel. Allah then sent down the revelation to the Final Prophet and Messenger, Muhammad, the son of Abdullah, from the offspring of Ismail, the son of Ibrahim, peace be upon them. Muhammad is the most honorable Prophet of all times.

"Having a servant, a wife and a house.''

In his Mustadrak, Al-Hakim recorded that Ibn Abbas said,

"A wife and a servant,

and gave you what He had not given to any other among the nations (Alamin),

means, during their time.''

"Sahih according to the criteria of the Two Sahihs, but they did not collect it.''

"They were the first people to take servants.''

He among you who wakes up while healthy in body, safe in his family and having the provision for that very day, is as if the world and all that was in it were collected for him.

means, during your time, as we stated.

The Children of Israel were the most honorable among the people of their time, compared to the Greek, Copts and the rest of mankind.

And indeed We gave the Children of Israel the Scripture, and the understanding of the Scripture and its laws, and the Prophethood; and provided them with good things, and preferred them above the nations (Al-`Alamin). (45:16)

They said: "O Musa! Make for us a god as they have gods.'' He said: "Verily, you are an ignorant people.'' (Musa added:) "Verily, these people will be destroyed for that which they are engaged in (idol worship).'' And all that they are doing is in vain. He said: "Shall I seek for you a god other than Allah, while He has given you superiority over the nations.'' (7:138-140)

Therefore, they were the best among the people of their time. The Muslim Ummah is more respected and honored before Allah, and has a more perfect legislative code and system of life, it has the most honorable Prophet, the larger kingdom, more provisions, wealth and children, a larger domain and more lasting glory than the Children of Israel. Allah said,

We mentioned the Mutawatir Hadiths about the honor of this Ummah and its status and honor with Allah, when we explained Allah's statement in Surah Al-Imran, كُنتُمْ خَيْرَ أُمَّةٍ أُخْرِجَتْ لِلنَّاسِ (You are the best of peoples ever raised up for mankind...). (3:110)