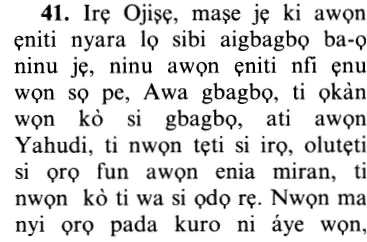 O Messenger! let not those grieve thee, who race each other into unbelief: (whether it be) among those who say "We believe" with their lips but whose hearts have no faith; or it be among the Jews,- men who will listen to any lie,- will listen even to others who have never so much as come to thee. They change the words from their (right) times and places: they say, "If ye are given this, take it, but if not, beware!" If any one's trial is intended by Allah, thou hast no authority in the least for him against Allah. For such - it is not Allah's will to purify their hearts. For them there is disgrace in this world, and in the Hereafter a heavy punishment.
O Messenger! let not those grieve you who strive together in hastening to unbelief from among those who say with their mouths: We believe, and their hearts do not believe, and from among those who are Jews; they are listeners for the sake of a lie, listeners for another people who have not come to you; they alter the words from their places, saying: If you are given this, take it, and if you are not given this, be cautious; and as for him whose temptation Allah desires, you cannot control anything for him with Allah. Those are they for whom Allah does not desire that He should purify their hearts; they shall have disgrace in this world, and they shall have a grievous chastisement in the hereafter.
O Messenger! Let not them grieve thee who vie one with another in the race to disbelief, of such as say with their mouths: &quot;We believe,&quot; but their hearts believe not, and of the Jews: listeners for the sake of falsehood, listeners on behalf of other folk who come not unto thee, changing words from their context and saying: If this be given unto you, receive it, but if this be not given unto you, then beware! He whom Allah doometh unto sin, thou (by thine efforts) wilt avail him naught against Allah. Those are they for whom the Will of Allah is that He cleanse not their hearts. Theirs in the world will be ignominy, and in the Hereafter an awful doom;

O Messenger! Let not those who hurry to fall into disbelief grieve you,

These honorable Ayat were revealed about those who rush into disbelief, deviating from the obedience of Allah, His Messenger, preferring their opinions and lusts to what Allah has legislated.

of such who say, "We believe'' with their mouths but their hearts have no faith.

These people pretend to be faithful with their words, but their hearts are empty from faith, and they are the hypocrites.

the enemies of Islam and its people, they and the hypocrites all.

listen much and eagerly to lies...,

and they accept and react to it positively.

listening to others who have not come to you,

meaning, they listen to some people who do not attend your meetings, O Muhammad.

Or, the Ayah might mean, they listen to what you say and convey it to your enemies who do not attend your audience.

The Jews Alter and Change the Law, Such As Stoning the Adulterer

They change the words from their places:

by altering their meanings and knowingly distorting them after they comprehended them.

It was reported that;

The correct opinion is that;

this Ayah was revealed about the two Jews who committed adultery. The Jews changed the law they had in their Book from Allah on the matter of punishment for adultery, from stoning to death, to a hundred flogs and making the offenders ride a donkey facing the back of the donkey.

When this incident of adultery occurred after the Hijrah, they said to each other, "Let us go to Muhammad and seek his judgment. If he gives a ruling of flogging, then implement his decision and make it a proof for you with Allah. This way, one of Allah's Prophets will have upheld this ruling amongst you. But if he decides that the punishment should be stoning to death, then do not accept his decision.''

There are several Hadiths mentioning this story.

What do find of the ruling about stoning in the Tawrah?

They said, `We only find that they should be exposed and flogged.'

They brought the Tawrah and opened it but one of them hid the verse about stoning with his hand and recited what is before and after that verse.

The Messenger of Allah decided that the adulterers be stoned to death and his command was carried out.

I saw that man shading the woman from the stones with his body.''

Al-Bukhari and Muslim also collected this Hadith and this is the wording collected by Al-Bukhari.

In another narration by Al-Bukhari, the Prophet said to the Jews,

What would you do in this case?

They said, "We would humiliate and expose them.''

Bring here the Tawrah and recite it, if you are truthful. (3:93)

So they brought a man who was blind in one eye and who was respected among them and said to him, "Read (from the Tawrah).''

So he read until he reached a certain verse and then covered it with his hand. He was told, "Remove your hand,'' and it was the verse about stoning.

So that man said, "O Muhammad! This is the verse about stoning, and we had hid its knowledge among us.''

So the Messenger ordered that the two adulterers be stoned, and they were stoned.

a Jewish man and a Jewish woman were brought before Allah's Messenger because they committed adultery. The Messenger of Allah went to the Jews and asked them,

What is the ruling that you find in the Tawrah for adultery?

They said, "We expose them, carry them (on donkeys) backwards and parade them in public.''

Bring here the Tawrah and recite it, if you are truthful. (3:93)

So they brought the Tawrah and read from it until the reader reached the verse about stoning. Then he placed his hand on that verse and read what was before and after it.

Abdullah bin Salam, who was with the Messenger of Allah, said, "Order him to remove his hand,'' and he removed his hand and under it was the verse about stoning.

So the Messenger of Allah commanded that the adulterers be stoned, and they were stoned.

Abdullah bin Umar said, "I was among those who stoned them and I saw the man shading the woman from the stones with his body.''

"Some Jews came to the Messenger of Allah and invited him to go to the Quff area. So he went to the house of Al-Midras and they said, `O Abu Al-Qasim! A man from us committed adultery with a woman, so decide on their matter.'

They arranged a pillow for the Messenger of Allah and he sat on it and said,

Bring the Tawrah to me.

He was brought the Tawrah and he removed the pillow from under him and placed the Tawrah on it, saying,

I trust you and He Who revealed it to you.

Bring me your most knowledgeable person.

and then he mentioned the rest of the story that Malik narrated from Nafi.

These Hadiths state that the Messenger of Allah issued a decision that conforms with the ruling in the Tawrah, not to honor the Jews in what they believe in, for the Jews were commanded to follow the Law of Muhammad only. Rather, the Prophet did this because Allah commanded him to do so. He asked them about the ruling of stoning in the Tawrah to make them admit to what the Tawrah contains and what they collaborated to hide, deny and exclude from implementing for all that time. They had to admit to what they did, although they did it while having knowledge of the correct ruling.

What made them go to the Prophet for judgment in this matter was their lusts and desires, hoping that the Prophet would agree with their opinion, not that they believed in the correctness of his judgment. This is why they said, إِنْ أُوتِيتُمْ هَـذَا (If you are given this), referring to flogging, then take it, وَإِن لَّمْ تُؤْتَوْهُ فَاحْذَرُواْ (but if you are not given this, then beware!) and do not accept or implement it.