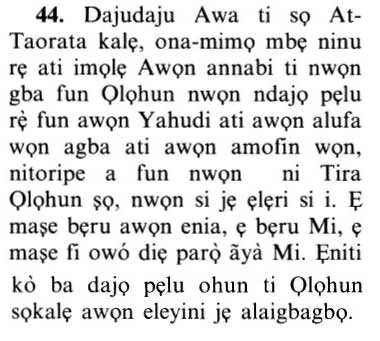 It was We who revealed the law (to Moses): therein was guidance and light. By its standard have been judged the Jews, by the prophets who bowed (as in Islam) to Allah's will, by the rabbis and the doctors of law: for to them was entrusted the protection of Allah's book, and they were witnesses thereto: therefore fear not men, but fear me, and sell not my signs for a miserable price. If any do fail to judge by (the light of) what Allah hath revealed, they are (no better than) Unbelievers.
Surely We revealed the Taurat in which was guidance and light; with it the prophets who submitted themselves (to Allah) judged (matters) for those who were Jews, and the masters of Divine knowledge and the doctors, because they were required to guard (part) of the Book of Allah, and they were witnesses thereof; therefore fear not the people and fear Me, and do not take a small price for My communications; and whoever did not judge by what Allah revealed, those are they that are the unbelievers.
Lo! We did reveal the Torah, wherein is guidance and a light, by which the prophets who surrendered (unto Allah) judged the Jews, and the rabbis and the priests (judged) by such of Allah's Scripture as they were bidden to observe, and thereunto were they witnesses. So fear not mankind, but fear Me. And My revelations for a little gain. Whoso judgeth not by that which Allah hath revealed: such are disbelievers.

Verily, We did send down the Tawrah (to Musa), therein was guidance and light, by which the Prophets who submitted themselves to Allah's will, judged the Jews.

and these Prophets did not deviate from the law of the Tawrah, change or alter it,

wherein Rabbaniyyun refers to the worshippers who are learned and religious,

and Ahbar refers to the scholars,

for to them was entrusted the protection of Allah's Book,

meaning, they were entrusted with the Book of Allah, and they were commanded to adhere to it and not hide any part of.

and they were witnesses thereto. Therefore fear not men but fear Me and sell not My verses for a miserable price. And whosoever does not judge by what Allah has revealed, such are the disbelievers.

There are two ways to explain this Ayah and we will mention the later.

Another Reason Behind Revealing these Honorable Ayat

This treaty remained in effect until the Prophet came to Al-Madinah and both of these groups became subservient under the Prophet. Yet, when the mighty group once suffered a casualty at the hands of the weaker group, the mighty group sent a delegation demanding the hundred Wasaq. The weaker group said, `How can two groups who have the same religion, one ancestral lineage and a common land, have a Diyah that for some of them is half of that of the others We only agreed to this because you oppressed us and because we feared you. Now that Muhammad has come, we will not give you what you asked.'

So war was almost rekindled between them, but they agreed to seek Muhammad's judgment in their dispute. The mighty group among them said (among themselves), `By Allah! Muhammad will never give you double the Diyah that you pay to them compared to what they pay to you. They have said the truth anyway, for they only gave us this amount because we oppressed and overpowered them. Therefore, send someone to Muhammad who will sense what his judgment will be. If he agrees to give you what you demand, accept his judgment, and if he does not give you what you seek, do not refer to him for judgment.'

So they sent some hypocrites to the Messenger of Allah to try and find out the Messenger's judgment. When they came to the Messenger, Allah informed him of their matter and of their plot. Allah sent down, يَا أَيُّهَا الرَّسُولُ لاَ يَحْزُنكَ الَّذِينَ يُسَارِعُونَ فِي الْكُفْرِ (O Messenger! Let not those who hurry to fall into disbelief grieve you), (5:41) until, الْفَاسِقُونَ (Such are the rebellious). (5:47)

By Allah! It is because of their problem that Allah sent down these verses and it is they whom Allah meant.''

Abu Dawud collected a similar narration for this Hadith.

the Ayah in Surah Al-Ma'idah, فَاحْكُم بَيْنَهُم أَوْ أَعْرِضْ عَنْهُمْ (either judge between them, or turn away from them...) until, الْمُقْسِطِينَ (Those who act justly), (5:42) was revealed concerning the problem of blood money between Bani An-Nadir and Bani Qurayzah.

The dead of Bani An-Nadir were being honored more and they received the full amount of Diyah, while Qurayzah received half the Diyah for their dead. So they referred to the Messenger of Allah for judgment and Allah sent down these verses about them.

The Messenger of Allah compelled them to adhere to the true judgment in this matter and made the Diyah the same for both groups and Allah knows best about that matter.''

Ahmad, Abu Dawud and An-Nasa'i also recorded this Hadith from Abu Ishaq. Al-Awfi and Ali bin Abi Talhah reported that Ibn Abbas said that these Ayat were revealed about the two Jews who committed adultery, and we mentioned the Hadiths about this story before.

It appears that both of these were the reasons behind revealing these Ayat, and Allah knows best.

This is why Allah said afterwards, وَكَتَبْنَا عَلَيْهِمْ فِيهَا أَنَّ النَّفْسَ بِالنَّفْسِ وَالْعَيْنَ بِالْعَيْنِ (And We ordained therein for them: Life for life, eye for eye) until the end of the Ayah, (5:45) which strengthens the opinion that the story of the Diyah was behind revealing the Ayat as we explained above.

And whosoever does not judge by what Allah has revealed, such are the disbelievers.

this Ayah was revealed about the People of the Book.

this Ayah also applies to us.

Abdur-Razzaq said that Ath-Thawri said that Mansur said that Ibrahim said that;

these Ayat, "Were revealed about the Children of Israel, and Allah accepted them for this Ummah.''

Ali bin Abi Talhah also stated that Ibn Abbas commented on Allah's statement, وَمَن لَّمْ يَحْكُم بِمَا أَنزَلَ اللّهُ فَأُوْلَـئِكَ هُمُ الْكَافِرُونَ (And whosoever does not judge by what Allah has revealed, such are the disbelievers),

"Ma`mar narrated to us that Tawus said that Ibn Abbas was asked about Allah's statement, وَمَن لَّمْ يَحْكُم (And whosoever does not judge...).

`It is not like those who disbelieve in Allah, His angels, His Books and His Messengers.'

`There is Kufr and Kufr less than Kufr, Zulm and Zulm less than Zulm, Fisq and Fisq less than Fisq.'''

Waki` said that Sa`id Al-Makki said that Tawus said that, وَمَن لَّمْ يَحْكُم بِمَا أَنزَلَ اللّهُ فَأُوْلَـئِكَ هُمُ الْكَافِرُونَ (And whosoever does not judge by what Allah has revealed, such are the disbelievers),

"This is not the Kufr that annuls one's religion.''