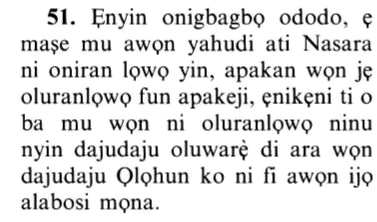 The Prohibition of Taking the Jews, Christians and Enemies of Islam as Friends

O you who believe! Do not take friends from the Jews and the Christians, as they are but friends of each other.

Allah forbids His believing servants from having Jews and Christians as friends, because they are the enemies of Islam and its people, may Allah curse them.

Allah then states that they are friends of each other and He gives a warning threat to those who do this,

And if any among you befriends them, then surely he is one of them.

Umar ordered Abu Musa Al-Ashari to send him on one sheet of balance the count of what he took in and what he spent. Abu Musa then had a Christian scribe, and he was able to comply with Omar's demand.

Umar liked what he saw and exclaimed, "This scribe is proficient. Would you read in the Masjid a letter that came to us from Ash-Sham?''

Abu Musa said, "So `Umar admonished me and poked my thigh (with his finger), saying, `Drive him out (from Al-Madinah).'

O you who believe! Take not the Jews and the Christians as friends...''

Then he reported that Abdullah bin `Utbah said,

"Let one of you beware that he might be a Jew or a Christian, while unaware.''

The narrator of this statement said, "We thought that he was referring to the Ayah, يَا أَيُّهَا الَّذِينَ آمَنُواْ لاَ تَتَّخِذُواْ الْيَهُودَ وَالنَّصَارَى أَوْلِيَاء (O you who believe! Take not the Jews and the Christians as friends),''

Verily, Allah guides not those people who are the wrongdoers.