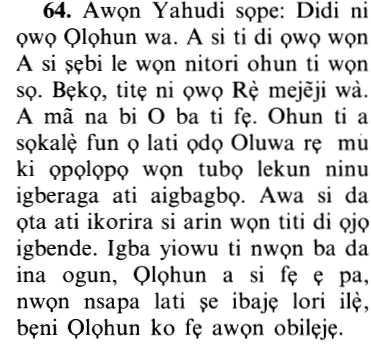 The Jews say: "Allah's hand is tied up." Be their hands tied up and be they accursed for the (blasphemy) they utter. Nay, both His hands are widely outstretched: He giveth and spendeth (of His bounty) as He pleaseth. But the revelation that cometh to thee from Allah increaseth in most of them their obstinate rebellion and blasphemy. Amongst them we have placed enmity and hatred till the Day of Judgment. Every time they kindle the fire of war, Allah doth extinguish it; but they (ever) strive to do mischief on earth. And Allah loveth not those who do mischief.
And the Jews say: The hand of Allah is tied up! Their hands shall be shackled and they shall be cursed for what they say. Nay, both His hands are spread out, He expends as He pleases; and what has been revealed to you from your Lord will certainly make many of them increase in inordinacy and unbelief; and We have put enmity and hatred among them till the day of resurrection; whenever they kindle a fire for war Allah puts it out, and they strive to make mischief in the land; and Allah does not love the mischief-makers.
The Jews say: Allah's hand is fettered. Their hands are fettered and they are accursed for saying so. Nay, but both His hands are spread out wide in bounty. He bestoweth as He will. That which hath been revealed unto thee from thy Lord is certain to increase the contumacy and disbelief of many of them, and We have cast among them enmity and hatred till the Day of Resurrection. As often as they light a fire for war, Allah extinguisheth it. Their effort is for corruption in the land, and Allah loveth not corrupters.

The Jews Say That Allah's Hand is Tied up!

Allah states that the Jews, may Allah's continuous curses descend on them until the Day of Resurrection, describe Him as a miser. Allah is far holier than what they attribute to Him.

The Jews also claim that Allah is poor, while they are rich.

"They do not mean that Allah's Hand is literally tied up. Rather, they mean that He is a miser and does not spend from what He has. Allah is far holier than what they attribute to Him.'' Similar was reported from Mujahid, Ikrimah, Qatadah, As-Suddi and Ad-Dahhak.

And let not your hand be tied (like a miser) to your neck, nor stretch it forth to its utmost reach (like a spendthrift), so that you become blameworthy and in severe poverty. (17:29)

In this Ayah, Allah prohibits stinginess and extravagance, which includes unnecessary and improper expenditures.

Allah describes stinginess by saying, وَلاَ تَجْعَلْ يَدَكَ مَغْلُولَةً إِلَى عُنُقِكَ (And let not your hand be tied (like a miser) to your neck).

Therefore, this is the meaning that the Jews meant, may Allah's curses be on them.

this Ayah was revealed about Finhas, one of the Jews, may Allah curse him.

We mentioned before that Finhas said, إِنَّ اللّهَ فَقِيرٌ وَنَحْنُ أَغْنِيَاء "(Truly, Allah is poor and we are rich!)'' (3:181), and that Abu Bakr smacked him. Allah has refuted what the Jews attribute to Him and cursed them in retaliation for their lies and fabrications about Him.

Be their hands tied up and be they accursed for what they uttered.

What Allah said occurred, for the Jews are indeed miserly, envious, cowards and tremendously humiliated.

Or have they a share in the dominion! Then in that case they would not give mankind even a Naqir. Or do they envy men for what Allah has given them of His bounty! Then, We had already given the family of Ibrahim the Book and the Hikmah, and conferred upon them a great kingdom. (4:53-54)

Nay, both His Hands are widely outstretched. He spends (of His bounty) as He wills.

Allah's favors are ample, His bounty unlimited, as He owns the treasures of everything. Any good that reaches His servants is from Him alone, without partners. He has created everything that we need by night or by day, while traveling or at home and in all situations and conditions.

And He gave you of all that you asked for, and if you count the blessings of Allah, never will you be able to count them. Verily, man is indeed an extreme wrongdoer, an extreme ingrate. (13:34)

There are many other Ayat on this subject.

"This is what Abu Hurayrah narrated to us that the Messenger of Allah said,

Allah's Right Hand is perfectly full, and no amount of spending can decrease what He has, even though He spends by night and by day. Do you see how much Allah has spent since He created the heavens and earth Yet surely it has not decreased what He has in His Right Hand. His Throne is over the water and in His Other Hand is the hold by which He raises and lowers.

He also said that Allah said,

This Hadith was recorded in the Two Sahihs.

Verily, the revelation that has come to you from your Lord makes many of them increase in rebellion and disbelief.

meaning, the bounty that comes to you, O Muhammad, is a calamity for your enemies, the Jews and their kind. The more the revelation increases the believers in faith, good works, and beneficial knowledge, the more the disbelievers increase in envy for you and your Ummah, the more they increase in Tughyan -- which is to exceed the ordained limits for things -- and in disbelief -- meaning denial of you.

Say: "It is for those who believe, a guide and a healing. And as for those who disbelieve, there is heaviness (deafness) in their ears, and it is blindness for them. They are those who are called from a place far away.'' (41:44)

And We send down of the Qur'an that which is a healing and a mercy to those who believe, and it increases wrongdoers in nothing but loss. (17:82)

We have put enmity and hatred among them till the Day of Resurrection.

Therefore, their hearts are never united. Rather, their various groups and sects will always have enmity and hatred for each other, because they do not agree on the truth, and because they opposed you and denied you.

Every time they kindled the fire of war, Allah extinguished it;

means, every time they try to plot against you and kindled the fire of war, Allah extinguishes it and makes their plots turn against them. Therefore, their evil plots will return to harm them.

and they (ever) strive to make mischief on earth. And Allah does not like the mischief-makers.

It is their habit to always strive to cause mischief on the earth, and Allah does not like those with such behavior.