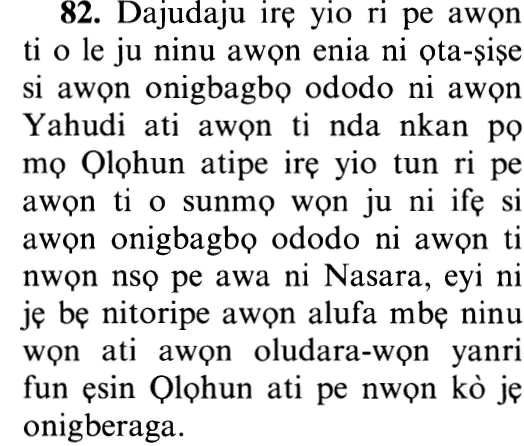 The Reason Behind Revealing these Ayat

Sa`id bin Jubayr, As-Suddi and others said that;

these Ayat were revealed concerning a delegation that An-Najashi (King of Ethiopia) sent to the Prophet in order to hear his words and observe his qualities.

When the delegation met with the Prophet and he recited the Qur'an to them, they embraced Islam, cried and were humbled. Then they returned to An-Najashi and told him what happened.

"They were Ethiopians who embraced Islam when the Muslims who migrated to Ethiopia resided among them.''

"They were some followers of the religion of `Isa, son of Maryam, who when they saw Muslims and heard the Qur'an, they became Muslims without hesitation.''

these Ayat were revealed concerning some people who fit this description, whether they were from Ethiopia or otherwise.

Verily, you will find the strongest among men in enmity to the believers the Jews and those who commit Shirk,

This describes the Jews, since their disbelief is that of rebellion, defiance, opposing the truth, belittling other, people and degrading the scholars. This is why the Jews - may Allah's continued curses descend on them until the Day of Resurrection - killed many of their Prophets and tried to kill the Messenger of Allah several times, as well as, performing magic spells against him and poisoning him. They also incited their likes among the polytheists against the Prophet.

and you will find the nearest in love to the believers those who say: "We are Christians.''

refers to those who call themselves Christians, who follow the religion of the Messiah and the teachings of his Injil. These people are generally more tolerant of Islam and its people, because of the mercy and kindness that their hearts acquired through part of the Messiah's religion. In another Ayah, Allah said;

And We ordained in the hearts of those who followed him, compassion, mercy, and monasticism... (57:27)

In their book is the saying; "He who strikes you on the right cheek, then turn the left cheek for him.''

And fighting was prohibited in their creed, and this is why Allah said,

That is because among them are Qissisin (priests) and Ruhban (monks), and they are not proud.

This means that among them are Qissisin (priests).

The word Ruhban refers to one dedicated to worship.

That is because among them are priests and monks, and they are not proud.

This describes them with knowledge, worship and humbleness, along with following the truth and fairness.