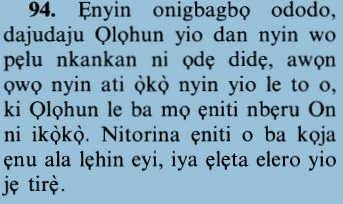 O ye who believe! Allah doth but make a trial of you in a little matter of game well within reach of game well within reach of your hands and your lances, that He may test who feareth him unseen: any who transgress thereafter, will have a grievous penalty.
O you who believe! Allah will certainly try you in respect of some game which your hands and your lances can reach, that Allah might know who fears Him in secret; but whoever exceeds the limit after this, he shall have a painful punishment.
O ye who believe! Allah will surely try you somewhat (in the matter) of the game which ye take with your hands and your spears, that Allah may know him who feareth Him in secret. Whoso transgresseth after this, for him there is a painful doom.

Allah will certainly make a trial for you with something in (the matter of) the game that is well within reach of your hands and your lances,

"The weak and young game. Allah tests His servants with such game during their Ihram, that if they wish, they would be able to catch it with their hands. Allah has commanded them to avoid catching it.''

تَنَالُهُ أَيْدِيكُمْ (well within reach of your hands), refers to the young game and chicks,

while وَرِمَاحُكُمْ (and your lances), refers to mature game.

this Ayah was revealed during the Umrah of Al-Hudaybiyyah, when wild game and birds were coming to the Muslim camping area, which they had never seen the likes of before. Allah prohibited them from hunting the game while in the state of Ihram.

that Allah may test who fears Him in the unseen.

Therefore, Allah tests His servants with the game that comes near their camping area, for if they wish, they can catch it with their hands and spears in public and secret. This is how the obedience of those who obey Allah in public and secret becomes apparent and tested.

Verily! Those who fear their Lord in the unseen, theirs will be forgiveness and a great reward (i.e. Paradise). (67:12)

Then whoever transgresses thereafter,

after this warning and threat, then,

for him there is a painful torment.

for his defiance of Allah's command and what He has decreed.