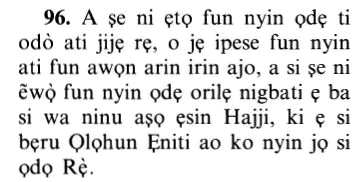 Lawful to you is the pursuit of water-game and its use for food,- for the benefit of yourselves and those who travel; but forbidden is the pursuit of land-game;- as long as ye are in the sacred precincts or in pilgrim garb. And fear Allah, to Whom ye shall be gathered back.
Lawful to you is the game of the sea and its food, a provision for you and for the travellers, and the game of the land is forbidden to you so long as you are on pilgrimage, and be careful of (your duty to) Allah, to Whom you shall be gathered.
To hunt and to eat the fish of the sea is made lawful for you, a provision for you and for seafarers; but to hunt on land is forbidden you so long as ye are on the pilgrimage. Be mindful of your duty to Allah, unto Whom ye will be gathered.

Water Game is Allowed for the Muhrim

Lawful to you is (the pursuit of) water game and its use for food,

Sa`id bin Al-Musayyib, Sa`id bin Jubayr and others commented on Allah's statement; أُحِلَّ لَكُمْ صَيْدُ الْبَحْرِ (Lawful to you is (the pursuit of) water game...), that it means,

what one eats fresh from it,

while, وَطَعَامُهُ (And its use for food) what is eaten dry and salted.

`water game' refers to what is taken from water while still alive,

while, وَطَعَامُهُ (and its use for food) refers to what the water throws ashore dead.

for the benefit of yourselves and those who travel,

as food and provision for you,

وَلِلسَّيَّارَةِ (and those who travel),

those who are in the sea and traveling along the sea.

Other scholars said that;

water game is allowed for those who fish it from the sea, as well as, when it is salted and used as food for travelers inland.

A similar statement was reported from Ibn Abbas, Mujahid and As-Suddi and others.

"Allah's Messenger sent an army towards the east coast and appointed Abu Ubaydah bin Al-Jarrah as their commander, and the army consisted of three hundred men, including myself.

We marched on until we reached a place where our food was about to finish. Abu Ubaydah ordered us to collect all the food for our journey, and it was collected in two bags of dates.

Abu Ubaydah kept on giving us our daily ration in small amounts from it, until it was exhausted. The share of each of us used to be one date only.''

I (one of the narrators from Jabir) said,

"How could one date suffice for you?''

Jabir replied, "We came to know its value when even that finished.''

Jabir added, "When we reached the seashore, we saw a huge fish which was like a small mountain. The army ate from it for eighteen days. Then Abu Ubaydah ordered that two of its ribs be affixed in the ground. Then he ordered that a she-camel be ridden, and it passed under the two ribs (forming an arch) without touching them.''

This Hadith was also collected in the Two Sahihs.

Its water is pure and its dead are lawful.''

The two Imams, Ash-Shafii and Ahmad bin Hanbal, recorded this Hadith, along with the Four Sunan compilers.

This Hadith was also recorded from the Prophet by several other Companions.

but forbidden is land game as long as you are in a state of Ihram.

Therefore, hunting land game during Ihram is not allowed, and

if someone who is in the state of Ihram hunts, he will have to pay expiation, along with the sin he earns if he does it intentionally.

If he hunts by mistake, he will have to pay the expiation and is not allowed to eat from it, because this type of game is just like dead animals, be he a Muhrim or a non-Muhrim.

If someone who is not in the state of Ihram hunts and gives the food to a Muhrim, the Muhrim is not allowed to eat from its meat if it was killed for him in particular.

he gave a zebra as a gift to the Prophet in the area of Waddan or Abwa', the Prophet gave it back. When the Prophet saw the effect of his returning the gift on As-Sa`b's face, he said,

We only gave it back to you because we are in a state of Ihram.

This Hadith was collected in the Two Sahihs.

The Prophet thought that As-Sa`b hunted the zebra for him, and this is why he refused to take it. Otherwise, the Muhrim is allowed to eat from the game if one who is not in Ihram hunts it.

For when Abu Qatadah hunted a zebra when he was not a Muhrim and offered it to those who were in the state of Ihram, they hesitated to eat from it.

They asked the Messenger of Allah and he said,

Did any of you point at it or help kill it?

This Hadith is also in the Two Sahihs with various wordings.

(Ibn Kathir only mentioned Ayat 96 to 99 here and explained the better part of Ayah number 96, but he did not mention the explanation of the rest of that Ayah or the other Ayat (97 to 99). This is the case in all of the copies of his Tafsir in existence, and he might have forgotten to do that, for it is less likely that all who copied this book forgot to copy only this part. So we used a summary of the Tafsir of these Ayat from the Imam of Tafsir, Ibn Jarir At-Tabari. We tried to summarize At-Tabari's eloquent words to the best of our ability, by Allah's help and leave).

And have Taqwa of Allah to Whom you shall be gathered back.

Allah says, fear Allah, O people, and beware of His might, by obeying what He commands you and avoiding what He prohibits for you in these Ayat revealed to your Prophet.

These Ayat forbid Khamr, gambling, Al-Ansab and Al-Azlam, along with hunting land game and killing it while in the state of Ihram. To Allah will be your return and destination, and He will punish you for disobeying Him and will reward you for obeying Him.