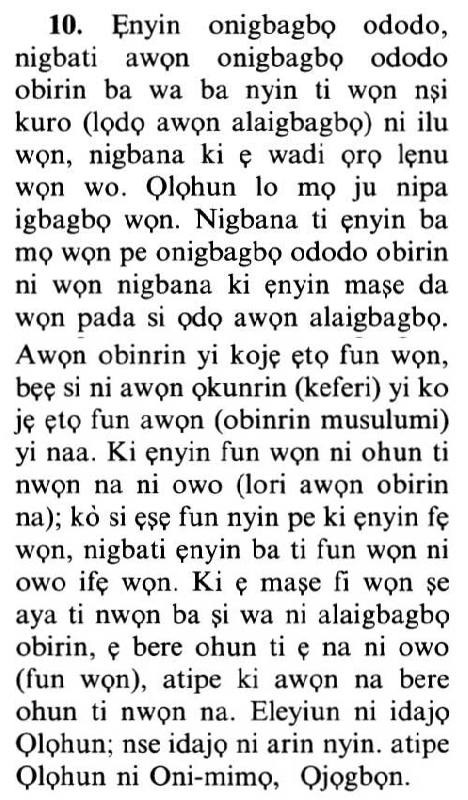 After Al-Hudaybiyyah, Emigrant Muslim Women may not be returned to the Disbelievers

In Surah Al-Fath, we related the story of the treaty at Al-Hudaybiyyah that was conducted between the Messenger of Allah and the disbelievers of Quraysh. In that treaty, there were these words,

"Everyman (in another narration, every person) who reverts from our side to your side should be returned to us, even if he is a follower of your religion.''

So according to this narration, this Ayah specifies and explains the Sunnah. And this is the best case of understanding.

Yet according to another view of some of the Salaf, it abrogates it.

"Umm Kulthum bint Uqbah bin Abi Mu`ayt emigrated and her brothers, Umarah and Al-Walid, went after her. They came to Allah's Messenger and talked to him about Umm Kulthum and asked that she be returned to them. Allah abolished the part of the treaty between the Prophet and the idolators about the women particularly. So He forbade returning Muslim women to the idolators and revealed the Ayah about testing them.''

When believing women come to you as emigrants, examine them;

"Their examination was asking them to testify to La ilaha illallah, and that Muhammad is Allah's servant and His Messenger.''

Allah knows best as to their faith,

Mujahid explained the Ayah,فَامْتَحِنُوهُنَّ (examine them) by saying,

"Ask them why they migrated. If they came because they were angry with their husbands, or for any other reason, and you realized that they did not embrace the faith, then send them back to their husbands.''

then if you ascertain that they are true believers, send them not back to the disbelievers.

This Ayah indicates that faith can be recognized and affirmed.

This Ayah forbids Muslim women for idolators, which was a lawful marriage in the beginning of Islam.

Abu Al-`As bin Ar-Rabi` was married to Zaynab, the Prophet's daughter. She was a Muslim, while Abu Al-`As was still an idolator like his people. When he was captured during the battle of Badr, his wife, Zaynab sent his ransom, a necklace that belonged to the Prophet's first wife Khadijah. The Prophet became very emotional when he saw the necklace and said to the Companions,

If you decide to set free the prisoner who belongs to her, then do so.

Abu Al-`As fulfilled his promise and sent Zaynab to Allah's Messenger along with Zayd bin Harithah. Zaynab remained in Al-Madinah after the battle of Badr, which took place in the second year of Hijrah, until her husband Abu Al-`As bin Ar-Rahi` embraced Islam in the eighth year after the Hijrah. She returned to their marriage without renewing the dowry.

But give them that which they have spent.

meaning, the husbands of the emigrant women who came from the idolators, return the dowry that they gave to their wives.

This was said by Ibn `Abbas, Mujahid, Qatadah, Az-Zuhri and several others.

And there will be no sin on you to marry them if you have paid their due to them.

means, when you wish to marry them, then give them their dowry. That is, marry them under the condition that their `Iddah (waiting period) is finished and they have a legal guardian for their marriage etc.

Likewise do not keep disbelieving women,

thus forbidding His faithful servants from marrying idolator women or remaining married to them.

In the Sahih, it is recorded that Al-Miswar and Marwan bin Al-Hakam said that

after the Messenger of Allah conducted the treaty with the Quraysh idolators at Al-Hudaybiyyah, some Muslim women emigrated to him and Allah the Exalted sent down this Ayah about them,

O you who believe! When believing women come to you as emigrants) until,

Likewise do not keep disbelieving women,

Then Umar bin Al-Khattab divorced two of his wives, who were idolatresses, and one of them got married to Mu`awiyah bin Abi Sufyan, while the other got married to Safwan bin Umayyah.

"This Ayah was revealed to Allah's Messenger while he was in the area of Al-Hudaybiyyah, after making peace. He agreed that whoever comes from the Quraysh to his side, will be returned to Makkah. When some women came, this Ayah was revealed. Allah commanded that the dowry that was paid to these women be returned to their husbands. Allah also ordered that if some Muslim women revert to the side of the idolators, the idolators should return their dowry to their Muslim husbands.

Likewise do not keep disbelieving women.''

means, ask them for what you have paid to your wives who reverted to the side of the idolators, and they are entitled to get back the dowry that they gave their wives who emigrated to the Muslims.

That is the judgement of Allah, He judges between you.

means, this judgement about the treaty and excluding women from its clauses, is a decision that Allah made for His creatures,

And Allah is All-Knowing, All-Wise.

meaning, He knows what benefits His servants and is the Most Wise about that.