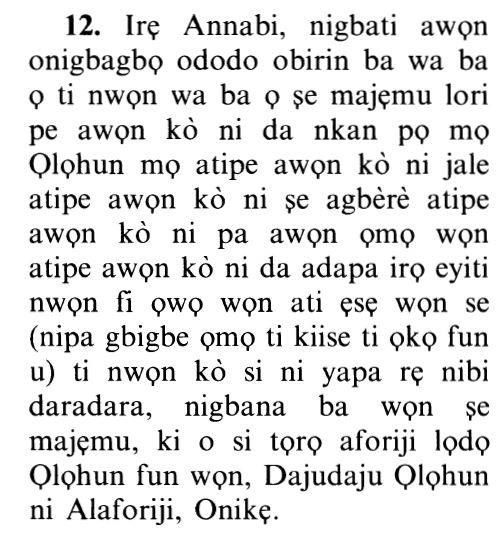 The Matters the Women pledged to

Al-Bukhari recorded that A'ishah the wife of the Prophet said,

"Allah's Messenger used to examine women who migrated to his side according to this Ayah,

O Prophet! When believing women come to you pledging to you...

Verily, Allah is Oft-Forgiving, Most Merciful.''

"A'ishah said, `When any believing woman agreed to these conditions, Allah's Messenger would say to her,

I have accepted your pledge.

but, by Allah, he never touched the hand of any women at all while taking the pledge from them. He only took their pledge of allegiance by saying,

I have accepted your pledge.''

This is the wording of Al-Bukhari.

"I came to Allah's Messenger with some women to give him our pledge and he took the pledge from us that is mentioned in the Qur'an, that we associate none with Allah, etc; as in the Ayah. Then he said,

As much as you can bear to implement.

We said, `Surely, Allah and His Messenger are more merciful with us than we are with ourselves.'

We then said, `O Allah's Messenger, should you not shake hands with us'

This Hadith has an authentic chain of narration; At-Tirmidhi, An-Nasa'i and Ibn Majah collected it.

"The Messenger of Allah took our pledge and recited to us the Ayah,

...that they will not associate anything with Allah,

and forbade us to wail for the dead. Thereupon, a lady withdrew her hand saying, `But such and such lady shared with me in lamenting (over one of my relatives), so I must reward hers.'

The Prophet did not object to that, so she went there and returned to the Prophet and he accepted her pledge of allegiance.''

"While we were with the Prophet , he said,

Pledge to me in that you will not associate any with Allah, nor steal, nor commit Zina, nor kill your children.

Then he recited the Ayah that begins; إِذَا جَاءكَ الْمُؤْمِنَاتُ يُبَايِعْنَكَ (when the believing women come to you...) and took the pledge of allegiance from the women.

Those among you who fulfill this pledge, will receive their reward from Allah.

Those who deviate from any of it and receive the legal punishment (in this life), the punishment will be expiation for that sin.

Whoever deviates from any of it and Allah screens him, then it is up to Allah to punish or forgive if He wills.

The Two Sahihs recorded this Hadith.

O Prophet! When the believing women come to you pledging to you,

means, `if any woman comes to you to give you the pledge and she accepts these conditions, then accept the pledge from her,'

meaning, the property of other people.

In the case where a husband is not fulfilling his duty of spending on his wife, then she is allowed to use a part of his wealth, what is reasonable, to spend on herself. This is the case regardless of whether the husband knows about his wife's actions or not, because of the Hadith in which Hind bint `Utbah said,

"O Allah's Messenger! Abu Sufyan is a miser! He does not give me sufficient money for the living expense of our family and myself. Am I allowed to secretly take from his money without his knowledge.''

Allah's Messenger said to her,

You may take from what is reasonable and appropriate for you and your children) This Hadith was recorded in the two Sahihs.

they will not commit Zina,

is similar to His other statement,

A Hadith collected from Samurah mentions that for the adulterers and fornicators there is a painful torment in the fire of Hell.

"Fatimah bint `Utbah came to give her pledge to Allah's Messenger, who took the pledge from her,

Fatimah bashfully placed her hand on her head in shyness. The Prophet liked what she did.

A'ishah said, `O woman! Accept the pledge, because by Allah, we all gave the pledge to the same.'

and she gave her pledge to the same things mentioned in the Ayah.'''

that they will not kill their children,

includes killing children after they are born.

The people of Jahiliyyah used to kill their children because they feared poverty. The Ayah includes killing the fetus, just as some ignorant women do for various evil reasons.

and that they will not utter slander, fabricating from between their hands and their feet,

"It means that they not to attribute to their husbands other than their legitimate children.''

and that they will not disobey you in Ma`ruf (good),

means, `that they will obey you when you order them to do good and forbid them from evil.'

Al-Bukhari recorded that Ibn `Abbas said about Allah's statement, وَلَا يَعْصِينَكَ فِي مَعْرُوفٍ (and that they will not disobey you in any Ma`ruf (good),

"This was one of the conditions which Allah imposed on the women.''

"Allah did not order obedience to His Prophet for other than Ma`ruf, and Ma`ruf is itself obedience.''

"Allah commanded that His Messenger, the best of His creation, be obeyed in that which is Ma`ruf.''

"Among the conditions included in our pledge to Allah's Messenger to good was not to wail. A woman said, `So-and-so family brought comfort to me (by wailing over my dead relative), so I will first pay them back.' So she went and paid them back in the same (wailed for their dead), and then came and gave her pledge. Only she and Umm Sulaym bint Milhan, the mother of Anas bin Malik, did so.''

Al-Bukhari collected this Hadith from the way of Hafsah bint Sirin from Umm `Atiyah Nusaybah Al-Ansariyah, may Allah be pleased with her.

Ibn Abi Hatim recorded that Asid bin Abi Asid Al-Barrad said that one of the women who gave the pledge to Allah's Messenger said,

"Among the conditions included in the pledge that the Messenger took from us, is that we do not disobey any act of Ma`ruf (good) that he ordains. We should neither scratch our faces, pull our hair (in grief), tear our clothes nor wail.''

then do thou receive their fealty, and pray to Allah for the forgiveness (of their sins): for Allah is Oft-Forgiving, Most Merciful.