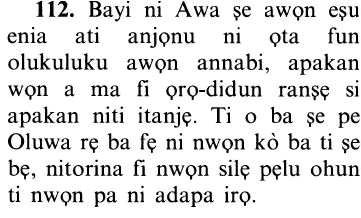 Likewise did We make for every Messenger an enemy,- evil ones among men and jinns, inspiring each other with flowery discourses by way of deception. If thy Lord had so planned, they would not have done it: so leave them and their inventions alone.
And thus did We make for every prophet an enemy, the Shaitans from among men and jinn, some of them suggesting to others varnished falsehood to deceive (them), and had your Lord pleased they would not have done it, therefore leave them and that which they forge.
Thus have We appointed unto every prophet an adversary - devils of humankind and jinn who inspire in one another plausible discourse through guile. If thy Lord willed, they would not do so; so leave them alone with their devising;

Every Prophet Has Enemies

And so We have appointed for every Prophet enemies -- Shayatin among mankind and Jinn, inspiring one another with adorned speech as a delusion.

Allah says, just as We made enemies for you, O Muhammad, who will oppose and rebel against you and become your adversaries, We also made enemies for every Prophet who came before you. Therefore, do not be saddened by this fact.

Allah said in other Ayat:

Verily, Messengers were denied before you, but with patience they bore the denial, and they were hurt... (6:34)

Thus have We made for every Prophet an enemy among the criminals. (25:31)

"None came with what you came with but he was the subject of enmity.''

The word, Shaytan, describes one who is dissimilar to his kind due to his or her wickedness. Indeed, only the Shayatin, may Allah humiliate and curse them, from among mankind and the Jinns oppose the Messengers.

inspiring one another with adorned speech as a delusion.

means, they inspire each other with beautified, adorned speech that deceives the ignorant who hear it.

If your Lord had so willed, they would not have done it;

for all this occurs by Allah's decree, will and decision, that every Prophet had enemies from these devils.

so leave them alone with their fabrications, (and lies).

This Ayah orders patience in the face of the harm of the wicked and to trust in Allah against their enmity, for, "Allah shall suffice for you (O Muhammad) and aid you against them.''