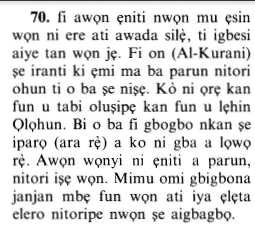 Leave alone those who take their religion to be mere play and amusement, and are deceived by the life of this world. But proclaim (to them) this (truth): that every soul delivers itself to ruin by its own acts: it will find for itself no protector or intercessor except Allah: if it offered every ransom, (or reparation), none will be accepted: such is (the end of) those who deliver themselves to ruin by their own acts: they will have for drink (only) boiling water, and for punishment, one most grievous: for they persisted in rejecting Allah.
And leave those who have taken their religion for a play and an idle sport, and whom this world's life has deceived, and remind (them) thereby lest a soul should be given up to destruction for what it has earned; it shall not have besides Allah any guardian nor an intercessor, and if it should seek to give every compensation, it shall not be accepted from it; these are they who shall be given up to destruction for what they earned; they shall have a drink of boiling water and a painful chastisement because they disbelieved.
And forsake those who take their religion for a pastime and a jest, and whom the life of the world beguileth. Remind (mankind) hereby lest a soul be destroyed by what it earneth. It hath beside Allah no protecting ally nor intercessor, and though it offer every compensation it will not be accepted from it. Those are they who perish by their own deserts. For them is drink of boiling water and a painful doom, because they disbelieved.

And leave alone those who take their religion as play and amusement, and are deceived by the life of this world.

The Ayah commands to leave such people, ignore them and give them respite, for soon, they will taste a tremendous torment.

But remind with it,

meaning, remind the people with this Qur'an and warn them against Allah's revenge and painful torment on the Day of Resurrection.

lest a soul Tubsal for that which one has earned,

meaning, so that it is not Tubsal.

Murrah and Ibn Zayd said that;

it means, `be recompensed'.

All these statements and expressions are similar, for they all mean exposure to destruction, being kept away from all that is good, and being restrained from attaining what is desired.

Every person is restrained by what he has earned. Except those on the Right. (74:38-39)

when he will find for himself no protector or intercessor besides Allah.

and even if he offers every ransom, it will not be accepted from him.

meaning, whatever the ransom such people offer, it will not be accepted from them.

Allah said in a similar statement,

Verily, those who disbelieved, and died while they were disbelievers, the (whole) earth full of gold will not be accepted from anyone of them. (3:91)

Such are they who are given up to destruction because of that which they have earned. For them will be a drink of boiling water and a painful torment because they used to disbelieve.