ALL THE WORLDS - ALL BEINGS, CALLING ON (DU´A), COMPANION, GUIDANCE, HEEL, HELP, 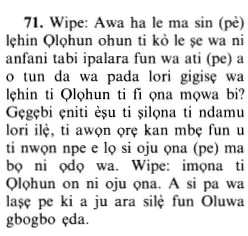 Say: "Shall we indeed call on others besides Allah,- things that can do us neither good nor harm,- and turn on our heels after receiving guidance from Allah? - like one whom the evil ones have made into a fool, wandering bewildered through the earth, his friends calling, come to us', (vainly) guiding him to the path." Say: "Allah's guidance is the (only) guidance, and we have been directed to submit ourselves to the Lord of the worlds;-
Say: Shall we call on that besides Allah, which does not benefit us nor harm us, and shall we be returned back on our heels after Allah has guided us, like him whom the Shaitans have made to fall down perplexed in the earth? He has companions who call him to the right way, (saying): Come to us. Say: Surely the guidance of Allah, that is the (true) guidance, and we are commanded that we should submit to the Lord of the worlds.
Say: Shall we cry, instead of unto Allah, unto that which neither profiteth us nor hurteth us, and shall we turn back after Allah hath guided us, like one bewildered whom the devils have infatuated in the earth, who hath companions who invite him to the guidance (saying): Come unto us? Say: Lo! the guidance of Allah is Guidance, and we are ordered to surrender to the Lord of the Worlds,

"Some idolators said to some Muslims, `Follow us and abandon the religion of Muhammad.' Allah sent down the revelation,

Say: "Shall we invoke others besides Allah, that can do us neither good nor harm, and shall we turn on our heels...''

by reverting to disbelief,

for if we do this, our example will be like he whom the devils have caused to wander in confusion throughout the land.

Allah says here, your example, if you revert to disbelief after you believed, is that of a man who went with some people on a road, but he lost his way and the devils led him to wander in confusion over the land. Meanwhile, his companions on the road were calling him to come to them saying, `Come back to us, for we are on the path.' But, he refused to go back to them. This is the example of he who follows the devil after recognizing Muhammad, and Muhammad is the person who is calling the people to the path, and the path is Islam.''

Like one whom the Shayatin (devils) have made to go astray confused (wandering) through the land,

his companions calling him to guidance (saying): `Come to us.'''

(calling him) by his name, his father's and his grandfather's names. So he follows the devils' call thinking that it is a path of guidance, but by the morning he will find himself destroyed and perhaps they eat him. The Jinns will then let him wander in a wasteland where he will die of thirst.

This is the example of those who follow the false gods that are being worshipped instead of Allah, Most Honored.

Say: "Verily, Allah's guidance is the only guidance,''

Allah said in other instances,

And whomsoever Allah guides, for him there will be none to misguide him. (39:37)

If you covet for their guidance, then verily Allah guides not those whom He makes to go astray. And they will have no helpers. (17:37)

and we have been commanded to submit to the Lord of all that exists.

means, we were commanded to worship Allah in sincerity to Him alone, without partners.