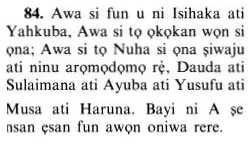 Allah states that after Ibrahim became old and he, and his wife, Sarah, lost hope of having children, He gave them Ishaq. The angels came to Ibrahim on their way to the people of Prophet Lut (to destroy them) and they delivered the good news of a child to Ibrahim and his wife. Ibrahim's wife was amazed at the news,

She said (in astonishment): "Woe unto me! Shall I bear a child while I am an old woman, and here is my husband, an old man! Verily! This is a strange thing!''

They said: "Do you wonder at the decree of Allah The mercy of Allah and His blessings be on you, O the family (of Ibrahim). Surely, He (Allah) is All-Praiseworthy, All-Glorious.'' (11:72-73)

The angels also gave them the good news that Ishaq will be a Prophet and that he will have offspring of his own.

And We gave him the good news of Ishaq a Prophet from the righteous.(37:112), which perfects this good news and completes the favor.

Certainly, one becomes jubilant and joyous when he becomes a grandfather, because this means that his offspring will continue to exist.

It was also expected that if an elderly couple had children, due to the child's weakness, he would have no offspring. This is why Allah delivered the good news of Ishaq and of his son Yaqub, whose name literally means `multiplying and having offspring'.

This was a reward for Ibrahim who left his people and migrated from their land so that he could worship Allah alone. Allah compensated Ibrahim with better than his people and tribe when He gave him righteous children of his own, who would follow his religion, so that his eyes would be comforted by them.

So when he turned away from them and from those whom they worshipped besides Allah, We gave him Ishaq and Yaqub, and each one of them We made a Prophet. (19:49)

And We bestowed upon him Ishaq and Yaqub, each of them We guided,

Qualities of Nuh and Ibrahim

As for Ibrahim, Allah did not send a Prophet after him but from his descendants. Allah said in other Ayat,

And We ordained among his (Ibrahim's) offspring Prophethood and the Book. (29:27)

And indeed, We sent Nuh and Ibrahim, and placed in their offspring Prophethood and the Book. (57:26)

and among his progeny...

meaning, We guided from among his offspring,

from the offspring of Nuh, according to Ibn Jarir.

It is also possible that the Ayah refers to Ibrahim since it is about him that the blessings were originally mentioned here, although Lut is not from his offspring, for he was Ibrahim's nephew, the son of his brother Maran, the son of Azar. It is possible to say that Lut was mentioned in Ibrahim's offspring as a generalization. As Allah said,

Or were you witnesses when death approached Yaqub When he said unto his sons, "What will you worship after me!''

Here, Ismail was mentioned among the ascendants of Yaqub, although he was Yaqub's uncle.

So the angels prostrated themselves, all of them together. Except Iblis -- he refused to be among those to prostrate. (15:30-31)

Allah included Iblis in His order to the angels to prostrate, and chastised him for his opposition, all because he was similar to them in that (order), so he was considered among them in general, although he was a Jinn. Iblis was created from fire while the angels were created from light.