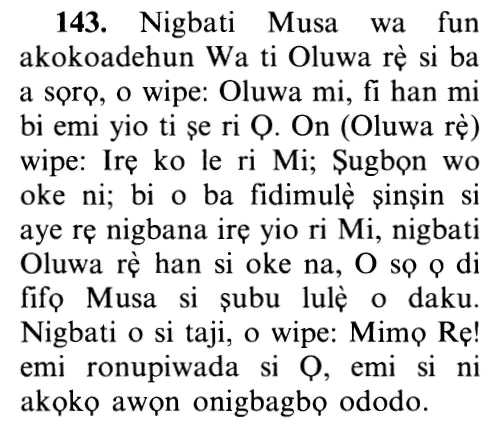 And when Musa came at the time and place appointed by Us, and his Lord (Allah) spoke to him; he said:

Allah said that when Musa came for His appointment and spoke to Him directly, he asked to see Him,

`You cannot' (Lan) by no means indicates that seeing Allah will never occur, as (the misguided sect of) Al-Mutazilah claimed.

The Hadiths of Mutawatir grade narrated from the Messenger of Allah, affirm that the believers will see Allah in the Hereafter. We will mention these Hadiths under the explanation of Allah's statement,

In earlier Scriptures, it was reported that Allah said to Musa, "O Musa! No living soul sees Me, but will perish, and no solid but will be demolished.''

Allah said: "You cannot see Me, but look upon the mountain; if it stands still in its place then you shall see Me.''

So when his Lord appeared to the mountain, He made it collapse to dust, and Musa fell down unconscious.

In his Musnad Imam Ahmad recorded from Anas bin Malik that;

Like this, then he held out the tip of his little finger.

At-Tirmidhi recorded this in the chapter of Tafsir for this Ayah, then he said; "This Hadith is Hasan Sahih Gharib.''

This was also recorded by Al-Hakim in his Mustadrak through the route of Hamad bin Salamah, and he said; "This Hadith is Sahih according to the criteria of Muslim and they did not record it.''

And As-Suddi reported that Ikrimah reported from Ibn Abbas about Allah's saying, فَلَمَّا تَجَلَّى رَبُّهُ لِلْجَبَلِ (And when his Lord appeared to the mountain),

Only the extent of the little finger appeared from Him, جَعَلَهُ دَكًّا (He made it collapse) as dust; وَخَرَّ موسَى صَعِقًا (And Musa fell down unconscious) fainting from it.

Ibn Jarir recorded these because of the relation to the word Al-Ghashi.

Then when he (Musa) recovered his senses, (after he lost consciousness),

thus, praising, glorifying and honoring Allah since no living soul could see Him in this life and remain alive.

"I turn to You in repentance,''

means, from asking you to look at you,

"and I am the first of the believers.''

among the Children of Israel, according to Ibn Abbas, Mujahid, and Ibn Jarir preferred this view.

Or, according to another narration from Ibn Abbas, the meaning of, وَأَنَاْ أَوَّلُ الْمُؤْمِنِينَ (and I am the first of the believers), is that

Abu Sa`id Al-Khudri and Abu Hurayrah narrated a Hadith from the Prophet that is suitable to mention here.

As for the Hadith from Abu Sa`id, Al-Bukhari recorded in his Sahih that he said:

A Jew came to the Prophet after his face was smacked, and said, "O Muhammad! One of your companions from Al-Ansar smacked me on the face.''

The Prophet asked him,

Why did you smack his face?

He said, "O Allah's Messenger! I passed by that Jew and heard him swearing, `No, by He Who has chosen Musa over mankind!'

I said, `Over Muhammad too', and I became angry and struck his face.''

Do not prefer me above the Prophets. Verily, on the Day of Resurrection, people will be struck unconscious, and I (feel that I) am the first to wake up. Thereupon I will find that Musa is holding onto a pillar of the Throne (Arsh of Allah). I will not know if he woke up before me or he received his due (because of his) unconsciousness on (Mount) At-Tur.

Al-Bukhari recorded this Hadith in many locations of his Sahih, as did Muslim and Abu Dawud.

As for the Hadith from Abu Hurayrah, Imam Ahmad and the Two Sheikhs (Al-Bukhari and Muslim) collected his narration.