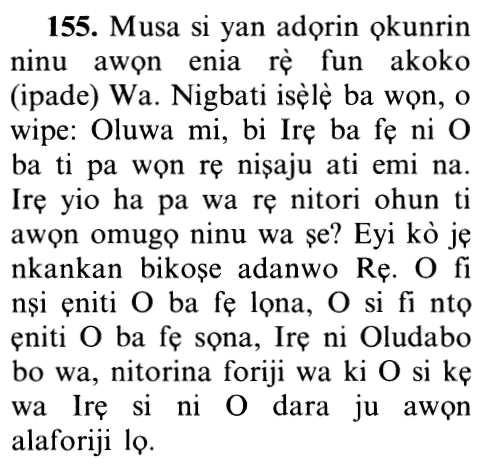 And Moses chose seventy of his people for Our place of meeting: when they were seized with violent quaking, he prayed: "O my Lord! if it had been Thy will Thou couldst have destroyed, long before, both them and me: wouldst Thou destroy us for the deeds of the foolish ones among us? this is no more than Thy trial: by it Thou causest whom Thou wilt to stray, and Thou leadest whom Thou wilt into the right path. Thou art our Protector: so forgive us and give us Thy mercy; for Thou art the best of those who forgive.
And Musa chose out of his people seventy men for Our appointment; so when the earthquake overtook them, he said: My Lord! if Thou hadst pleased, Thou hadst destroyed them before and myself (too); wilt Thou destroy us for what the fools among us have done? It is naught but Thy trial, Thou makest err with it whom Thou pleasest and guidest whom Thou pleasest: Thou art our Guardian, therefore forgive us and have mercy on us, and Thou art the best of the forgivers.
And Moses chose of his people seventy men for Our appointed tryst and, when the trembling came on them, he said: My Lord! If Thou hadst willed Thou hadst destroyed them long before, and me with them. Wilt thou destroy us for that which the ignorant among us did? It is but Thy trial (of us). Thou sendest whom Thou wilt astray and guidest whom Thou wilt: Thou art our Protecting Friend, therefore forgive us and have mercy on us, Thou, the Best of all who show forgiveness.

Seventy Men from the Children of Israel go for the appointed Meeting Place that Allah designated, Allah later on destroys Them

And Musa chose out of his people seventy (of the best) men for Our appointed time and place of meeting, and when they were seized with a violent earthquake,

"Allah commanded Musa to choose seventy men. So he chose them and proceeded with them in order that they supplicate to their Lord. Their supplication included asking Allah,

`O Allah! Give us what you have never given anyone before us and will never give anyone after us!' Allah disliked this supplication and they were seized with a violent earthquake,

He said: "O my Lord, if it had been Your will, You could have destroyed them and me before.'''

"Allah commanded Musa to come with thirty men from the Children of Israel, apologizing for worshipping the calf; and He gave them an appointed time and place. وَاخْتَارَ مُوسَى قَوْمَهُ سَبْعِينَ رَجُل (And Musa chose out of his people seventy (of the best) men).

He chose these men and went along with them so that they could apologize. When they reached the appointed place, they said, لَن نُّؤْمِنَ لَكَ (We shall never believe in you), (2:55) `O Musa, حَتَّى نَرَى اللَّهَ جَهْرَةً until we see Allah plainly, for you spoke to Him,' they said, `therefore, show Him to us.' فَأَخَذَتْهُمُ الصَّاعِقَةُ (but they were struck with a bolt of lightning) (4:153) and they died.

Musa stood up crying, invoking Allah, `O Lord! What should I tell the Children of Israel, when I go back to them after You destroyed their best men!' رَبِّ لَوْ شِئْتَ أَهْلَكْتَهُم مِّن قَبْلُ وَإِيَّايَ ("O my Lord, if it had been Your will, You could have destroyed them and me before'').'''

"Musa chose seventy of the best men from the Children of Israel. He said to them, `Go to the meeting with Allah and repent for what you committed. Beg His forgiveness for those of your people whom you left behind. Fast, purify yourselves and clean your clothes.'

So, he went with them to Mount Tur in Sinai for the meeting place and time designated by his Lord. He went there only with the leave and knowledge of Allah.

According to what has been mentioned to me, when the seventy did what he ordered them to do, and went with him to the meeting of Musa with his Lord, they said, `Request that we may also hear the words of our Lord.'

But when Allah spoke to Musa, his cloak was surrounded by a brilliant light which no human could bear to look at, so below him a barrier was placed and the people approached.

When they entered the cloud they fell prostrate and they heard Him while he was speaking to Musa, commanding him and forbidding him, saying what to do and what not to do. When He completed commanding him, and removed the cloud from Musa, he faced the people and they said, `O Musa! We will not believe in you unless we see Allah directly.' So the thunder shook them, their souls were captured and they all died. Musa stood up invoking, begging and supplicating to his Lord, رَبِّ لَوْ شِئْتَ أَهْلَكْتَهُم مِّن قَبْلُ وَإِيَّايَ ("O my Lord, if it had been Your will, You could have destroyed them and me before).'''

meaning, `They were foolish. Would You destroy anyone who comes after me from the Children of Israel'

"They were seized by the tremor or lightning, because they neither shunned nor forbade their people who worshipped the calf.''

This is supported by Musa's statement,

"would You destroy us for the deeds of the fools among us!''

According to Ibn Abbas, Sa`id bin Jubayr, Abu Al-Aliyah, Ar-Rabi bin Anas and several among the Salaf and latter scholars,

This is the only plausible meaning, in which Musa says,

"You are our protector, so forgive us and have mercy on us: for You are the best of those who forgive.''

pertains to (Allah's) covering the mistake and not punishing for the sin.

Whenever mercy is mentioned along with forgiveness (such as in Musa's supplication to Allah), it includes the hope that Allah does not permit one to fall into that act again.

وَأَنتَ خَيْرُ الْغَافِرِينَ ("for You are the best of those who forgive),''

for none except You can forgive the sin.