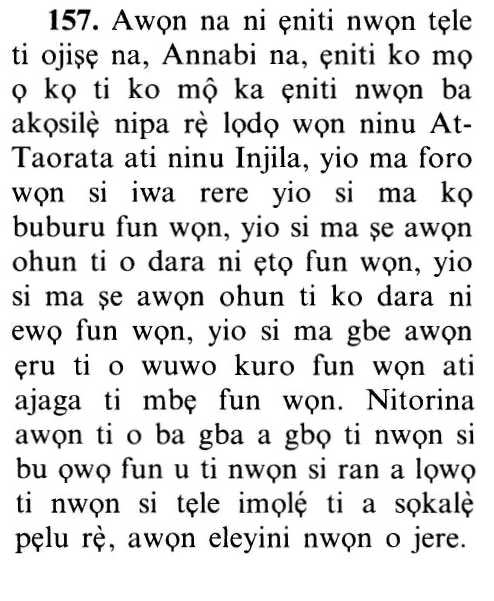 The Description of that Messenger

Those who follow the Messenger, the Prophet who can neither read nor write whom they find written of with them in the Tawrah and the Injil,

This is the description of the Prophet Muhammad in the Books of the Prophets. They delivered the good news of his advent to their nations and commanded them to follow him. His descriptions were still apparent in their Books, as the rabbis and the priests well know.

Imam Ahmad recorded that Abu Sakhr Al-Uqayli said that a Bedouin man said to him,

"I brought a milk-producing camel to Al-Madinah during the life time of Allah's Messenger. After I sold it, I said to myself, `I will meet that man (Muhammad) and hear from him.' So I passed by him while he was walking between Abu Bakr and Umar, and I followed them until they went by a Jewish man, who was reading from an open copy of the Tawrah. He was mourning a son of his who was dying and who was one of the most handsome boys. The Messenger of Allah asked him (the father),

I ask you by He Who has sent down the Tawrah, do you not find the description of me and my advent in your Book?

He nodded his head in the negative.

His son said, `Rather, yes, by He Who has sent down the Tawrah! We find the description of you and your advent in our Book. I bear witness that there is no deity worthy of worship except Allah and that you are the Messenger of Allah.'

The Prophet said (to the Companions),

Stop the Jew (the father) from (taking care of) your brother (in Islam).

The Prophet then personally took care of the son's funeral and led the funeral prayer on him.'''

This Hadith is sound and is supported by a similar Hadith in the Sahih narrated from Anas.

"I met Abdullah bin `Amr and asked him, `Tell me about the description of Allah's Messenger in the Tawrah.'

He said, `Yes, by Allah! He is described in the Tawrah, just as he is described in the Qur'an, يَا أَيُّهَا النَّبِيُّ إِنَّا أَرْسَلْنَاكَ شَاهِدًا وَمُبَشِّرًا وَنَذِيرًا O Prophet! Verily, We have sent you as a witness, and a bearer of glad tidings, and a warner. (33:45) as a safe refuge for the unlettered ones. `You are My servant and Messenger. I have called you `Al-Mutawakkil' (who trusts in Allah), not hard or harsh.' Neither uttering foul speech in the markets nor returning evil deed with one in kind. Rather, he forgives and forgoes. Allah will not end his life until He straightens through him the crooked religion, so that they might proclaim, `There is no deity worthy of worship except Allah.' He will open through him sealed hearts, deaf ears and blind eyes.'''

"I also met Ka`b and asked him the same question, and his answer did not differ from Abdullah's answer, even concerning one letter.''

Al-Bukhari recorded it from Abdullah bin `Amr. It was also recorded by Al-Bukhari (up to the word) forgoes. And he mentioned the narration of Abdullah bin `Amr then he said; "It was common in the speech of our Salaf that they describe the Books of the People of the Two Scriptures as the Tawrah, as some Hadiths concur. Allah knows best.''

He commands them to do good; and forbids them from evil;

This is the description of the Messenger of Allah in previous Books. These were the true qualities of our Messenger, as well, for he only ordained good and forbade evil.

We should mention here that Abdullah bin Mas`ud said,

And verily, We have sent among every Ummah a Messenger (proclaiming): "Worship Allah, and avoid the Taghut (false deities).'' (16:36)

He makes lawful for them the good things, and forbids them from the evil things,

meaning, he makes the Bahirah, Sa'ibah, Wasilah and Ham, etc., lawful. They were prohibitions that they invented which were only hard for themselves. He also forbids them from evil things, such as the flesh of the pig, Riba, and foods that were treated as lawful although Allah the Exalted had forbidden them.

He (Muhammad) releases them from their heavy burdens, and from the fetters that were upon them.

indicates that Muhammad came with leniency and an easy religion.

As mentioned in the Hadith recorded from many routes that Allah's Messenger said,

I was sent with the easy way of Hanifiyyah (monotheism).

The Prophet said to the two Commanders he appointed, Mu`adh and Abu Musa Al-Ash`ari, when he sent them to Yemen,

Bring glad tidings and do not drive people away, make things easy and do not make them difficult, obey each other and do not differ among yourselves.

Allah has forgiven my Ummah for what occurs in themselves, as long as they do not utter it or act upon it.

My Ummah was forgiven (by Allah) unintentional errors, forgetfulness and what they are forced to do.''

This is why Allah has guided this Ummah to proclaim,

"Our Lord! Punish us not if we forget or fall into error,

our Lord! Lay not on us a burden like that which You did lay on those before us (Jews and Christians);

our Lord! Put not on us a burden greater than we have strength to bear.

Pardon us and grant us forgiveness. Have mercy on us.

You are our Mawla (Patron, Supporter and Protector) and give us victory over the disbelieving people.

It is recorded in Sahih Muslim that (the Prophet said that);

Allah the Exalted said after every one of these supplications, "I shall accept (your supplication).''

So those who believe in him, honor him, help him.

refers to respecting and honoring Muhammad,

and follow the light which has been sent down with him,

the Qur'an and the revelation (Sunnah) that the Prophet delivered to mankind,

it is they who will be successful.

in this life and the Hereafter.