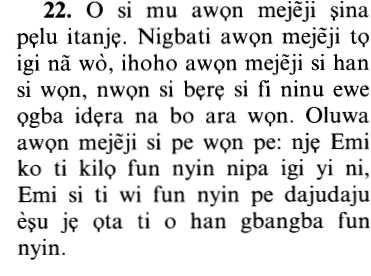 So he misled them with deception. Then when they tasted of the tree, that which was hidden from them of their shame (private parts) became manifest to them and they began to cover themselves with the leaves of Paradise.

"Adam was a tall man, about the height of a palm tree, and he had thick hair on his head. When he committed the error that he committed, his private part appeared to him while before, he did not see it. So he started running in fright through Paradise, but a tree in Paradise took him by the head. He said to it, `Release me,' but it said, `No, I will not release you.' So his Lord called him, `O Adam! Do you run away from Me!'

Ibn Jarir and Ibn Marduwyah collected this statement using several chains of narration from Al-Hasan from Ubayy bin Ka`b who narrated it from the Prophet. However, relating the Hadith to Ubayy is more correct.

This statement has an authentic chain of narration leading to Ibn Abbas.

Mujahid said that they began to cover themselves with the leaves of Paradise,

Ibn Jarir reported this statement with an authentic chain of narration.

"Adam said, `O Lord! What if I repented and sought forgiveness!'

Allah said, `Then, I will admit you into Paradise.' As for Shaytan, he did not ask for forgiveness, but for respite. Each one of them was given what he asked for.''