ALL THE WORLDS - ALL BEINGS, COMMAND, CREATION OF THE UNIVERSE, HEAVEN, MOON, NAMES OF ALLAH, NIGHT, STAR, SUN, THRONE, THE 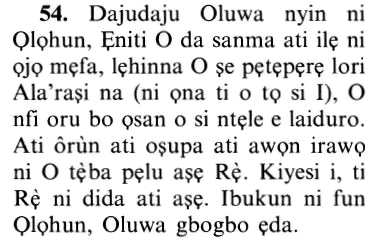 The Universe was created in Six Days

Indeed, your Lord is Allah, Who created the heavens and the earth in Six Days,

Allah states that He created the universe, the heavens and earth and all that is in, on and between them in six days, as He has stated in several Ayat in the Qur'an.

These six days are: Sunday, Monday, Tuesday, Wednesday, Thursday and Friday. On Friday, the entire creation was assembled and on that day, Adam was created. There is a difference of opinion whether these days were the same as our standard days as suddenly comes to the mind, or each day constitutes one thousand years, as reported from Mujahid, Imam Ahmad bin Hanbal, and from Ibn Abbas according to Ad-Dahhak's narration from him. As for Saturday, no creation took place in it since it is the seventh day of (of the week). The word `As-Sabt' means stoppage, or break.

As for Allah's statement,

and then He rose over (Istawa) the Throne.

the people had several conflicting opinions over its meaning. However, we follow the way that our righteous predecessors took in this regard, such as Malik, Al-Awza`i, Ath-Thawri, Al-Layth bin Sa`d, Ash-Shafi`i, Ahmad, Ishaq bin Rahwayh and the rest of the scholars of Islam, in past and present times.

Surely, we accept the apparent meaning of, Al-Istawa, without discussing its true essence, equating it (with the attributes of the creation), or altering or denying it (in any way or form). We also believe that the meaning that comes to those who equate Allah with the creation is to be rejected, for nothing is similar to Allah,

Indeed, we assert and affirm what the Imams said, such as Nu`aym bin Hammad Al-Khuza'i, the teacher of Imam Al-Bukhari, who said,

"Whoever likens Allah with His creation, will have committed Kufr.

Whoever denies what Allah has described Himself with, will have committed Kufr.

Certainly, there is no resemblance (of Allah with the creation) in what Allah and His Messenger have described Him with.

Whoever attests to Allah's attributes that the plain Ayat and authentic Hadiths have mentioned, in the manner that suits Allah's majesty, all the while rejecting all shortcomings from Him, will have taken the path of guidance.''

The Day and the Night are among the Signs of Allah

He brings the night as a cover over the day, seeking it rapidly,

And a sign for them is the night. We withdraw therefrom the day, and behold, they are in darkness. And the sun runs on its fixed course for a term (appointed). That is the decree of the All-Mighty, the All-Knowing. And the moon, We have measured for it mansions (to traverse) till it returns like the old dried curved date stalk. It is not for the sun to overtake the moon, nor does the night outstrip the day. They all float, each in an orbit. (36:37-40)

the night follows the day in succession and does not come later or earlier than it should be.

seeking it rapidly, and (He created) the sun, the moon, the stars subjected to His command.

meaning, all are under His command, will and dominion.

Surely, His is the creation and commandment,

the dominion and the decision.

Blessed is Allah, the Lord of the all that exists!

which is similar to the Ayah,

Abu Ad-Darda' said a supplication, that was also attributed to the Prophet,

O Allah! Yours is all the kingdom, all the praise, and Yours is the ownership of all affairs. I ask You for all types of good and seek refuge with You from all types of evil.