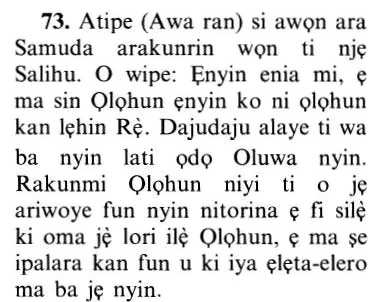 To the Thamud people (We sent) Salih, one of their own brethren: He said: "O my people! worship Allah: ye have no other god but Him. Now hath come unto you a clear (Sign) from your Lord! This she-camel of Allah is a Sign unto you: So leave her to graze in Allah's earth, and let her come to no harm, or ye shall be seized with a grievous punishment.
And to Samood (We sent) their brother Salih. He said: O my people! serve Allah, you have no god other than Him; clear proof indeed has come to you from your Lord; this is (as) Allah's she-camel for you-- a sign, therefore leave her alone to pasture on Allah's earth, and do not touch her with any harm, otherwise painful chastisement will overtake you.
And to (the tribe of) Thamud (We sent) their brother Salih. He said: O my people! Serve Allah. Ye have no other Allah save Him. A wonder from your Lord hath come unto you. Lo! this is the camel of Allah, a token unto you; so let her feed in Allah's earth, and touch her not with hurt lest painful torment seize you.

Thamud: Their Land and Their Lineage

Scholars of Tafsir and genealogy say that (the tribe of Thamud descended from) Thamud bin Athir bin Iram bin Sam bin Nuh, and he is brother of Jadis son of Athir, similarly the tribe of Tasm, and they were from the ancient Arabs, Al-Aribah, before the time of Ibrahim, Thamud came after `Ad. They dwelled between the area of the Hijaz (Western Arabia) and Ash-Sham (Greater Syria).

The Messenger of Allah passed by the area and ruins of Thamud when he went to Tabuk (in northern Arabia) during the ninth year of Hijrah.

"When the Messenger of Allah went to the area of Al-Hijr in Tabuk with the people, he camped near the homes of Thamud, in Al-Hijr and the people brought water from the wells that Thamud used before. They used that water to make dough and placed the pots (on fire) for cooking. However, the Prophet commanded them to spill the contents of the pots and to give the dough to their camels. He then marched forth with them from that area to another area, near the well that the camel (as will follow) used to drink from. He forbade the Companions from entering the area where people were tormented, saying,

I fear that what befell them might befall you as well. Therefore, do not enter on them.''

Ahmad narrated that Abdullah bin Umar said that the Messenger of Allah said while in the Hijr area,

The basis of this Hadith is mentioned in Two Sahihs.

The Story of Prophet Salih and Thamud

And to Thamud (people, We sent) their brother Salih.

meaning, to the tribe of Thamud, We sent their brother Salih,

He said: "O my people! Worship Allah! You have no other god but Him.''

All Allah's Messengers called to the worship of Allah alone without partners.

And We did not send any Messenger before you but We revealed to him (saying): "None has the right to be worshipped but I, so worship Me.'' (21:25)

And verily, We have sent among every Ummah a Messenger (proclaiming): "Worship Allah (Alone), and avoid Taghut (all false deities).'' (16:36)

Thamud asked that a Camel appear from a Stone, and it did

"Indeed there has come to you a clear sign from your Lord. This she-camel of Allah is a sign unto you;''

meaning, a miracle has come to you from Allah testifying to the truth of what I came to you with.

Salih's people asked him to produce a miracle and suggested a certain solid rock that they chose, which stood lonely in the area of Hijr, and which was called Al-Katibah. They asked him to bring a pregnant camel out of that stone.

Salih took their covenant and promises that if Allah answers their challenge, they would believe and follow him. When they gave him their oaths and promises to that, Salih started praying and invoked Allah (to produce that miracle). All of a sudden, the stone moved and broke apart, producing a she-camel with thick wool. It was pregnant and its fetus was visibly moving in its belly, exactly as Salih's people asked. This is when their chief, Jundu bin `Amr, and several who followed him believed.

The rest of the noblemen of Thamud wanted to believe as well, but Dhu'ab bin `Amr bin Labid, Al-Habbab, who tended their idols, and Rabbab bin Sum`ar bin Jilhis stopped them.

One of the cousins of Jundu bin `Amr, whose name was Shihab bin Khalifah bin Mikhlat bin Labid bin Jawwas, was one of the leaders of Thamud, and he also wanted to accept the message. However, the chiefs whom we mentioned prevented him, and he conceded to their promptings.

The camel remained in Thamud, as well as, its offspring after she delivered it before them. The camel used to drink from its well on one day and leave the well for Thamud the next day. They also used to drink its milk, for on the days she drank water, they used to milk her and fill their containers from its milk.

And inform them that the water is to be shared between (her and) them, each one's right to drink being established (by turns). (54:28)

The camel used to graze in some of their valleys, going through a pass and coming out through another pass. She did that so as to be able to move easily, because she used to drink a lot of water. She was a tremendous animal that had a strikingly beautiful appearance. When she used to pass by their cattle, the cattle would be afraid of her.

When this matter continued for a long time and Thamud's rejection of Salih became intense, they intended to kill her so that they could take the water for themselves every day. It was said that all of them (the disbelievers of Thamud) conspired to kill the camel.

Qatadah said that he was told that,

"The designated killer of the camel approached them all, including women in their rooms and children, and found out that all of them agreed to kill her.'' This fact is apparent from the wording of the Ayat,

Then they denied him and they killed it. So their Lord destroyed them because of their sin, and made them equal in destruction! (91:14)

so you leave her to graze in Allah's earth, and touch her not with harm, lest a painful torment should seize you.