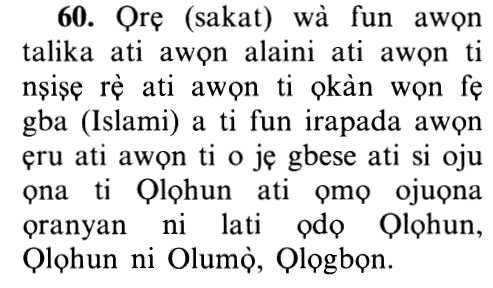 As-Sadaqat (i.e., Zakah) are only for the Fuqara, and Al-Masakin and those employed to collect (the funds); and to attract the hearts of those who have been inclined (towards Islam); and to free the captives; and for those in debt; and for Allah's cause, and for Ibn As-Sabil;

After Allah mentioned the protest that the ignorant hypocrites mentioned to the Prophet about the distribution of alms. He stated that it is He who divided the alms, explained its rulings and decided in its division; He did not delegate this decision to anyone else.

Allah mentioned the expenditures of Zakah in this Ayah, starting with the Fuqara (the poor) because they have more need than the other categories, since their need is pressing and precarious.

It was reported that Ibn Abbas, Mujahid, Al-Hasan Al-Basri, Ibn Zayd and several others said that;

the Faqir is a graceful person who does not ask anyone for anything, while the Miskin is the one who follows after people, begging.

"The Faqir is the ill person, while the Miskin is physically fit.''

Ibn Umar said that the Messenger of Allah said,

The alms should not be given to the wealthy and the physically fit.

Abu Hurayrah narrated that the Messenger of Allah said,

The needy person is not the one who goes round the people and asks them for a mouthful or two (of meals) or a date or two.

They asked, "Then who is the needy person, O Allah's Messenger!''

The one who does not have enough to satisfy his needs and whose condition is not known to others, that others may give him something in charity, and who does not beg of people.

The Two Sheikhs collected this Hadith

Those employed to collect Alms

Those employed to collect alms deserve a part of the alms, unless they are relatives of the Messenger of Allah, who are not allowed to accept any Sadaqah.

Muslim recorded that Abdul-Muttalib bin Rabi`ah bin Al-Harith and Al-Fadl bin Al-Abbas went to the Messenger of Allah asking him to employ them to collect the alms. The Messenger replied,

Verily, the alms are not allowed for Muhammad nor the relatives of Muhammad, for it is only the dirt that the people discard.

There are those who are given alms to embrace Islam. For instance, the Prophet of Allah gave something to Safwan bin Umayyah from the war spoils of Hunayn, even though he attended it while a Mushrik. Safwan said, "He kept giving me until he became the dearest person to me after he had been the most hated person to me.''

"The Messenger of Allah gave me (from the spoils of) Hunayn while he was the most hateful person to me. He kept giving me until he became the most beloved person to me.''

Muslim and At-Tirmidhi collected this Hadith, as well.

Some of Al-Mu'allafatu Qulubuhum are given from alms so that they become better in Islam and their heart firmer in faith. For instance, the Prophet gave some of the chiefs of the Tulaqa a hundred camels each after the battle of Hunayn, saying,

I give a man (from the alms) while another man is dearer to me than him, for fear that Allah might throw him on his face in the fire of Jahannam.

It is recorded in the Two Sahihs that Abu Sa`id said that;

To draw their hearts closer.

Some people are given because some of his peers might embrace Islam, while others are given to collect alms from surrounding areas, or to defend Muslim outposts.

Riqab means those slaves who make an agreement with the master to pay a certain ransom for their freedom.''

"It is allowed to use Zakah funds to buy the freedom of slaves,''

indicating that `Riqab' has more general meanings than merely giving money to slaves to buy their freedom or one's buying a slave and freeing him on an individual basis.

for every limb (of the servant) freed, Allah frees a limb of the one who freed him from slavery, even a sexual organ for a sexual organ, for the reward is equitable to the deed,

And you will be requited nothing except for what you used to do. (37:39)

In the Musnad, there is a Hadith from Al-Bara bin Azib that a man asked,

"O Allah's Messenger! Direct me to an action that draws me closer to Paradise and away from the Fire.''

Emancipate the person and free the neck (slave).

The man asked, "O Allah's Messenger! Are they not one and the same?''

No, you emancipate a person by freeing him on your own, but you untie a neck (slave) by helping in its price.

There are several types of indebted persons. They include;

those who incur expenses in solving disputes between people,

those who guarantee a loan that became due, causing financial strain to them, and

those whose funds do not sufficiently cover their debts.

It also includes those who indulged in a sin and repented from it.

These types have a right to a part of alms (designated for Al-Gharimun).

"I carried a debt (resolving a dispute between people) and went to the Messenger of Allah asking him to help pay it.

Be patient until some alms are brought to us so that we give it to you.

O Qabisah! Begging is only allowed for three:

a man who incurred debts solving disputes, so he is allowed to beg until he collects its amount and then stops.

A man who was inflicted by a disaster that consumed his wealth, he is allowed to beg until he collects what suffices for his livelihood.

Other than these cases, begging is an unlawful amount that one illegally devours.

"During the time of the Messenger of Allah, a man was struck by disaster because of fruits that he bought, causing him extensive debts. The Prophet said,

The people did that but the amount collected did not cover his debts. The Prophet said to the man's debtors,

Take what was collected, you will have nothing beyond that.''

In the Cause of Allah

In the cause of Allah is exclusive for the benefit of the fighters in Jihad, who do not receive compensation from the Muslim Treasury.

Ibn As-Sabil is a term used for the needy traveler in a land, where he does not have what helps him continue his trip. This type has a share in the Zakah for what suffices him to reach his destination, even if he had money there.

The same is true for whoever intends to travel from his area but does not have enough money. This type also has a share in the Zakah money to suffice for his trip and back.

This is proven in the Ayah as well as the following Hadith.

Sadaqah is not rightful for a wealthy person except in five cases:

those employed to collect it,

one who bought a charity item with his money,

a fighter in the cause of Allah, or

a poor man who gets a part of the Zakah so he gives it as a gift to a rich man.