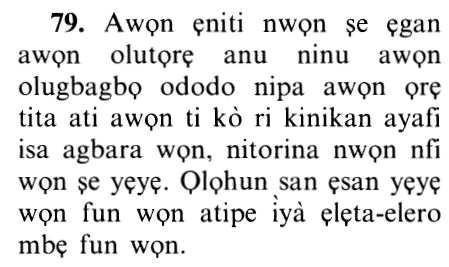 Those who slander such of the believers as give themselves freely to (deeds of) charity, as well as such as can find nothing to give except the fruits of their labour,- and throw ridicule on them,- Allah will throw back their ridicule on them: and they shall have a grievous penalty.
They who taunt those of the faithful who give their alms freely, and those who give to the extent of their earnings and scoff at them; Allah will pay them back their scoffing, and they shall have a painful chastisement.
Those who point at such of the believers as give the alms willingly and such as can find naught to give but their endeavours, and deride them - Allah (Himself) derideth them. Theirs will be a painful doom.

(Those who point at such of the believers as give the alms willinglyﾅ) [9:79]. Said ibn Muhammad ibn Ahmad ibn Jafar informed us> Abu Ali al-Faqih> Abu Ali Muhammad ibn Sulayman al-Maliki> Abu Musa Muhammad ibn al-Muthanna> Abul-Numan al-Hakam ibn Abd Allah al-Ijli> Shubah> Salman> Abu Wail>Abu Masud who said: ﾓWhen the verses of alms were revealed, we used to ask to carry people stuff in exchange for a wage so that we could earn and pay alms from what we had earned.
A man came and gave a lot for alms, some people commented: He is just showing off. Another man came and gave a measure (sa) for alms, and they commented: Allah can do without the measure of this man, and so Allah revealed (Those who point at such of the believers as give the alms willingly and such as can find naught to give but their endeavoursﾅ)ﾔ.
This is narrated by Bukhari from Abu Qudamah Ubayd Allah ibn Said>> Abu Numan. Qatadah and others said: ﾓThe Messenger of Allah, Allah bless him and give him peace, encouraged people to give alms. Abd al-Rahman ibn Awf took with him four thousand silver coins and said: O Messenger of Allah, all my wealth consists of eight thousand silver coins, I have kept half of it for my dependents and brought the other half for you to spend it in the way of Allah. The Messenger of Allah, Allah bless him and give him peace, said: may Allah bless you for that which you have given and for that which you have withheld.
Allah did indeed bless the wealth of Abd al-Rahman to the extent that when he died he was survived by two wives who inherited one eighth of his fortune. This one eighth was estimated at 160 thousand silver coins. On the same day, Asim ibn Adiyy ibn al-Ajlan gave to charity one hundred wasq of dates while Abu Aqil al-Ansari gave one sa of dates. Abu Aqil said: O Messenger of Allah, I spent the night drawing water with a rope until I earned two measures (sa) of dates; I kept one for my family and brought the other.
The Messenger of Allah, Allah bless him and give him peace, commanded him to spread it among the received alms. The hypocrites defamed Abd al-Rahman and Asim, saying Abd al-Rahman and Asim gave alms only to show off. Allah and His Messenger can indeed do without the measure (sa) of Abu Aqil; he only wished to appear righteous. And so Allah, exalted is He, revealed this verseﾔ.

Hypocrites defame Believers Who give the Little Charity They can afford

Those who defame such of the believers who give charity voluntarily, and such who could not find to give charity except what is available to them --

Among the traits of the hypocrites is that they will not leave anyone without defaming and ridiculing him in all circumstances even those who give away charity.

"When the verses of charity were revealed, we used to work as porters. A man came and distributed objects of charity in abundance and they (hypocrites) said, `He is showing off.'

Another man came and gave a Sa` (a small measure of food grains); they said, `Allah is not in need of this small amount of charity.'

Then the Ayah was revealed; الَّذِينَ يَلْمِزُونَ الْمُطَّوِّعِينَ (Those who defame the volunteers...).''

Muslim collected this Hadith in the Sahih.

"One day, the Messenger of Allah went out to the people and called them to bring forth their charity, and they started bringing their charity. Among the last to come forth was a man who brought a Sa` of dates, saying, `O Allah's Messenger! This is a Sa` of dates. I spent the night bringing water and earned two Sa` of dates for my work. I kept one Sa` and brought you the other Sa`.'

The Messenger of Allah ordered him to add it to the charity.

Some men mocked that man, saying, `Allah and His Messenger are not in need of this charity. What benefit would this Sa` of yours bring'

Abdur-Rahman bin Awf asked Allah's Messenger, `Are there any more people who give charity?'

Abdur-Rahman bin Awf said, `I will give a hundred Uqiyah of gold as a charity.'

Umar bin Al-Khattab said to him, `Are you crazy?'

Abdur-Rahman said, `I am not crazy.'

Umar said, `Have you given what you said would give!'

May Allah bless you for what you kept and what you gave away.

However, the hypocrites defamed him, `By Allah! Abdur-Rahman gave what he gave just to show off.'

They lied, for Abdur-Rahman willingly gave that money, and Allah revealed about his innocence and the innocence of the fellow who was poor and brought only a Sa` of dates.

Allah said in His Book,

Those who defame such of the believers who give charity voluntarily.'''

A similar story was narrated from Mujahid and several others.

"Among the believers who gave away charity were Abdur-Rahman bin Awf who gave four thousand Dirhams and Asim bin Adi from Bani Ajlan.

This occurred after the Messenger of Allah encouraged and called for paying charity.

Asim bin Adi also stood and gave a hundred Wasaq of dates, but some people defamed them, saying, `They are showing off.' As for the person who gave the little that he could afford, he was Abu Aqil, from Bani Anif Al-Arashi, who was an ally of Bani Amr bin Awf. He brought a Sa` of dates and added it to the charity. They laughed at him, saying, `Allah does not need the Sa` of Abu Aqil.'''

so they mock at them (believers); Allah will throw back their mockery on them,

rebuking them for their evil actions and defaming the believers. Truly, the reward, or punishment, is equitable to the action. Allah treated them the way mocked people are treated, to aid the believers in this life. Allah has prepared a painful torment in the Hereafter for the hypocrites, for the recompense is similar to the deed.

and they shall have a painful torment.