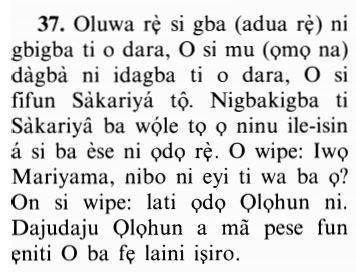 Right graciously did her Lord accept her: He made her grow in purity and beauty: To the care of Zakariya was she assigned. Every time that he entered (Her) chamber to see her, He found her supplied with sustenance. He said: "O Mary! Whence (comes) this to you?" She said: "From Allah: for Allah Provides sustenance to whom He pleases without measure."
So her Lord accepted her with a good acceptance and made her grow up a good growing, and gave her into the charge of Zakariya; whenever Zakariya entered the sanctuary to (see) her, he found with her food. He said: O Marium! whence comes this to you? She said: It is from Allah. Surely Allah gives to whom He pleases without measure.
And her Lord accepted her with full acceptance and vouchsafed to her a goodly growth; and made Zachariah her guardian. Whenever Zachariah went into the sanctuary where she was, he found that she had food. He said: O Mary! Whence cometh unto thee this (food)? She answered: It is from Allah. Allah giveth without stint to whom He will.

Maryam Grows Up; Her Honor is with Allah

So her Lord (Allah) accepted her with goodly acceptance.

Allah states that He has accepted Maryam as a result of her mother's vow and that,

He made her grow in a good manner,

meaning, made her conduct becoming, her mannerism delightful and He made her well liked among people. He also made her accompany the righteous people, so that she learned righteousness, knowledge and religion.

And put her under the care of Zakariyya,

meaning, Allah made Zakariyya her sponsor.

Allah made Zakariyya Maryam's guardian for her benefit, so that she would learn from his tremendous knowledge and righteous conduct. He was the husband of her maternal aunt, as Ibn Ishaq and Ibn Jarir stated, or her brother-in-law, as mentioned in the Sahih,

I saw John and `Isa, who are maternal cousins.

We should state that in general terms, what Ibn Ishaq said is plausible, and in this case, Maryam was under the care of her maternal aunt.

The Two Sahihs recorded that;

the Messenger of Allah decided that Amarah, the daughter of Hamzah, be raised by her maternal aunt, the wife of Jafar bin Abi Talib, saying,

Allah then emphasizes Maryam's honor and virtue at the place of worship she attended,

Every time he entered the Mihrab to (visit) her, he found her supplied with sustenance.

When Zakariyya would see this;

He said: "O Maryam! From where have you gotten this!''

meaning, where did you get these fruits from!

Verily, Allah provides sustenance to whom He wills, without limit.