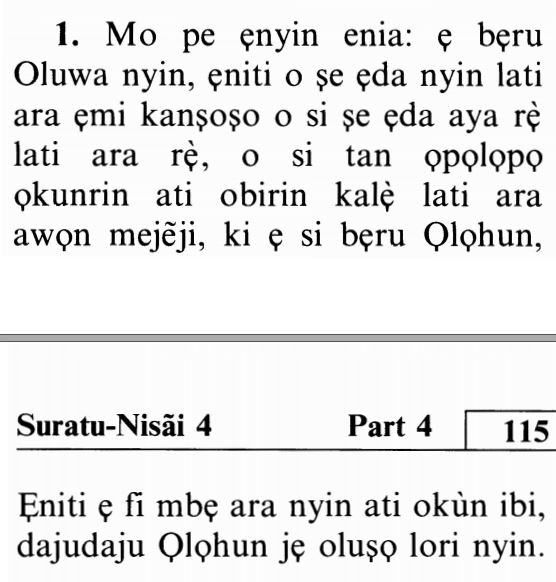 The Command to have Taqwa, a Reminder about Creation, and Being Kind to Relatives

O mankind! Have Taqwa of your Lord, Who created you from a single person,

Allah commands His creatures to have Taqwa of Him by worshipping Him Alone without partners.

He also reminds to them of His ability, in that He created them all from a single person, Adam, peace be unto him.

And from him He created his wife,

Hawwa' (Eve), who was created from Adam's left rib, from his back while he was sleeping. When Adam woke up and saw Hawwa', he liked her and had affection for her, and she felt the same toward him.

Woman was created from a rib. Verily, the most curved portion of the rib is its upper part, so, if you should try to straighten it, you will break it, but if you leave it as it is, it will remain crooked.

And from them both He created many men and women;

means, Allah created from Adam and Hawwa' many men and women and distributed them throughout the world in various shapes, characteristics, colors and languages. In the end, their gathering and return will be to Allah.

And have Taqwa of Allah through Whom you demand your mutual (rights) and revere the wombs,

protect yourself from Allah by your acts of obedience to Him.

Allah's statement, الَّذِي تَسَاءلُونَ بِهِ (through Whom you demand your mutual (rights)),

According to Ibrahim, Mujahid and Al-Hasan,

is in reference to when some people say, "I ask you by Allah, and then by the relation of the Rahim (the womb, i.e. my relationship to you).''

"Fear Allah Whom you invoke when you conduct transactions and contracts.''

"And revere the womb by not cutting the relations of the womb, but keep and honor them.

Surely, Allah is always watching over you.

means, He watches all your deeds and sees your every circumstance.

Worship Allah as if you see Him, for even though you cannot see Him, He sees you.

This part of the Ayah encourages having a sense of certainty that Allah is always watching, in a complete and perfect manner.

Allah mentioned that He has created mankind from a single father and a single mother, so that they feel compassion for each other and are kind to the weaker among them.

In his Sahih, Muslim recorded that Jarir bin Abdullah Al-Bajali said that;

a delegation from Mudar came to the Messenger of Allah, and he saw their state, wearing striped woolen clothes due to poverty. After the Zuhr prayer, the Messenger of Allah stood up and gave a speech in which he recited, يَا أَيُّهَا النَّاسُ اتَّقُواْ رَبَّكُمُ الَّذِي خَلَقَكُم مِّن نَّفْسٍ وَاحِدَةٍ (O mankind! Have Taqwa of your Lord, Who created you from a single person), until the end of the Ayah. He also recited, يَا أَيُّهَا الَّذِينَ آمَنُوا اتَّقُوا اللَّهَ وَلْتَنظُرْ نَفْسٌ مَّا قَدَّمَتْ لِغَدٍ (O you who believe! Have Taqwa of Allah. And let every person look to what he has sent forth for the tomorrow). (59:18)

He also encouraged them to give charity, saying,

This narration was also collected by Ahmad and the Sunan compilers from Ibn Mas`ud.

Surah An-Nisa' was revealed in Al-Madinah.

In his Mustadrak, Al-Hakim recorded that Abdullah bin Mas`ud said,

"There are five Ayat in Surah An-Nisa' that I would prefer to the life of this world and all that is in it,

If you avoid the great sins which you are forbidden to do. (4:31)

Verily, Allah forgives not that partners should be set up with Him (in worship), but He forgives except that (anything else) to whom He wills. (4:48)

If they (hypocrites), when they had been unjust to themselves, had come to you. (4:64)

And whoever does evil or wrongs himself, but afterwards seeks Allah's forgiveness, he will find Allah Oft-Forgiving, Most Merciful. (4:110)''

"Ask me about Surah An-Nisa', for I learned the Qur'an when I was still young.''

"This Hadith is Sahih according to the criteria of the Two Sahihs, and they did not collect it.''