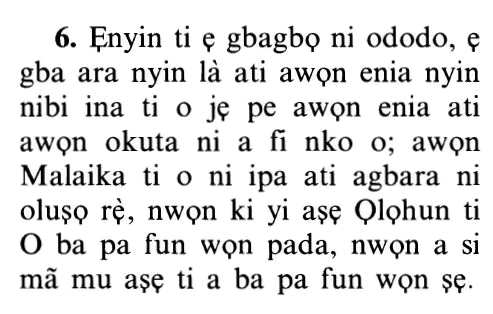 Protect yourselves and your families against a Fire (Hell)

"He commands obedience to Allah, to not disobey Allah, he orders his family to obey His orders and helps them to act upon His orders. When one sees disobedience, he stops them and forbids them from doing it.''

Similar was said by Ad-Dahhak and Muqatil;

"It is an obligation for the Muslim to teach his near family members, and his male and female slaves what Allah has made obligatory for them and what Allah has forbidden for them.''

There is a Hadith that confirms the meaning of this Ayah.

Ahmad, Abu Dawud and At-Tirmidhi recorded that Ar-Rabi` bin Sabrah said that his father said that the Messenger of Allah said,

This is the narration that Abu Dawud collected;

Fuel for Hell and a Description of its Angels

whose fuel is men and stones,

indicating that the Children of Adam will be fuel for the Fire that will feed it,

وَالْحِجَارَةُ and stones, in reference to the idols that were worshipped, just as Allah said in another Ayah,

Certainly you and that which you are worshipping now besides Allah, are (but) fuel for Hell! (21:98)

Abdullah bin Mas`ud, Mujahid, Abu Ja`far Al-Baqir and As-Suddi said that these are sulfur stones that are more putrid than rotten corpses, according to Mujahid.

over which are (appointed) angels stern (and) severe,

means, their nature of behavior is stern, because the mercy has been taken out of their hearts for those who disbelieve in Allah,

شِدَادٌ severe, meaning, their structure is powerful, strong and frightening,

who disobey not the commands they receive from Allah, but do that which they are commanded.

meaning, whatever Allah commands them, they rush to obey Him, without delay for even a twinkling of an eye. They are able to fulfill the command; they are called Az-Zabaniyah, meaning, the keepers and guards of Hell, may Allah give us shelter from them.