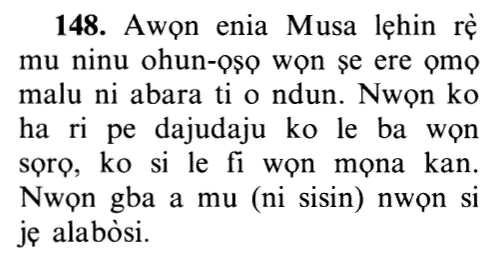 The people of Moses made, in his absence, out of their ornaments, the image of calf, (for worship): it seemed to low: did they not see that it could neither speak to them, nor show them the way? They took it for worship and they did wrong.
And Musa's people made of their ornaments a calf after him, a (mere) body, which gave a mooing sound. What! could they not see that it did not speak to them nor guide them in the way? They took it (for worship) and they were unjust.
And the folk of Moses, after (he left them), chose a calf (for worship), (made) out of their ornaments, of saffron hue, which gave a lowing sound. Saw they not that it spake not unto them nor guided them to any way? They chose it, and became wrong-doers.

Story of worshipping the Calf

And the people of Musa made in his absence, out of their ornaments, the image of a calf (for worship). It had a sound.

Allah describes the misguidance of those who worshipped the calf that As-Samiri made for them from the ornaments they borrowed from the Copts. He made the shape of a calf with these ornaments and threw in it a handful of dust from the trace of the horse that the Angel Jibril was riding, and the calf seemed to moo. This occurred after Musa went for the appointed term with his Lord, where Allah told him about what happened when he was on Mount Tur.

Allah said about His Honorable Self,

The scholars of Tafsir have different views over the calf, whether it actually became alive and mooing, or if it remained made of gold, but the air entering it made it appear to be mooing. These are two opinions. Allah knows best.

It was reported that when the statue mooed, the Jews started dancing around it and fell into misguidance because they adored it. They said that this, the calf, is your god and the god of Musa, but Musa forgot it!

Did they not see that it could not return them a word (for answer), and that it had neither power to harm them nor to do them good. (20:89)

Did they not see that it could neither speak to them nor guide them to the way,

Allah condemned the Jews for falling into misguidance, worshipping the calf and ignoring the Creator of the heavens and earth, the Lord and King of all things. They worshipped besides Him a statue made in the shape of a calf, that seemed to moo, but it neither spoke to them nor brought them any benefit. Rather, their very sense of reason was blinded because of ignorance and misguidance.

They took it (for worship) and they were wrongdoers.