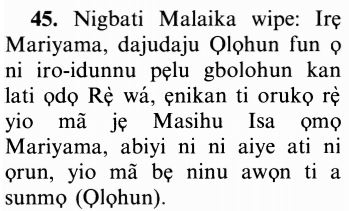 Delivering the Good News to Maryam of `Isa's Birth

This Ayah contains the glad tidings the angels brought to Maryam that she would give birth to a mighty son who will have a great future.

(Remember) when the angels said: "O Maryam! Verily, Allah gives you the glad tidings of a Word from Him,

a son who will come into existence with a word from Allah, `Be', and he was.

According to the majority of the scholars, this is the meaning of Allah's statement (about Yahya) مُصَدِّقًا بِكَلِمَةٍ مِّنَ اللّهِ (Believing in the Word from Allah) (3:39).

His name will be Al-Masih, `Isa, the son of Maryam,

and he will be known by this name in this life, especially by the believers.

`Isa was called "Al-Masih'' (the Messiah) because when he touched (Mash) those afflicted with an illness, they would be healed by Allah's leave.

relates `Isa to his mother, because he did not have a father.

Held in honor in this world and in the Hereafter, and will be one of those who are near to Allah.

meaning, he will be a leader and honored by Allah in this life, because of the Law that Allah will reveal to him, sending down the Scripture to him, along with the other bounties that Allah will grant him with.

`Isa will be honored in the Hereafter and will intercede with Allah, by His leave, on behalf of some people, just as is the case with his brethren the mighty Messengers of Allah, peace be upon them all.