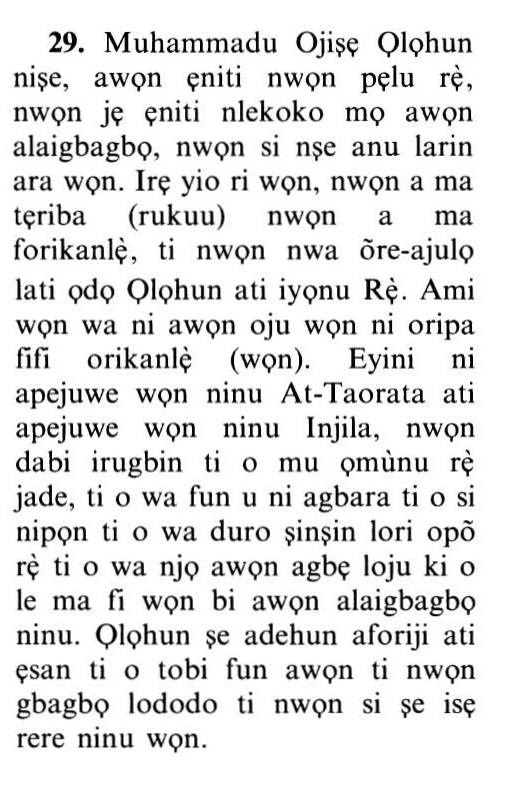 Qualities of the Faithful Believers and Their Refinement

Allah declares that without doubt, Muhammad is truly His Messenger,

Muhammad is the Messenger of Allah. (and this quality includes every beautiful description).

Allah praises the Companions of the Messenger, may Allah be pleased with them all,

And those who are with him are severe against disbelievers, merciful among themselves.

just as He, the Exalted and Most Honored, said in another Ayah,

Allah will bring a people whom He will love and they will love Him; humble towards the believers, stern towards the disbelievers. (5:54)

O you who believe! Fight those of the disbelievers who are close to you, and let them find harshness in you. (9:123)

The parable of the believers in their kindness and mercy for each other, is that of the body: when one of its organs falls ill, the rest of the body responds with fever and sleeplessness.

A believer to another believer is like a building whose different parts enforce each other.

Then he clasped his hands with his fingers interlaced.

Both of these Hadiths were collected in the Sahih.

Allah the Exalted and Most Honored said,

You see them bowing and falling down prostrate, seeking reward from Allah and acceptance.

Allah describes the believers as active in performing righteous deeds and in praying, which is the best action there is, all the while being sincere to Allah the Exalted and Most Honored in the prayer, awaiting His generous reward alone.

Allah's best reward is Paradise that contains His bounties and favors, abundant provisions, as well as, earning His good pleasure that is greater than the former reward.

But the greatest bliss is the acceptance by Allah. (9: 72)

The statement of Allah the Exalted next,

The mark of them is on their faces from the traces of prostration.

refers to graceful appearance, according to Ibn Abbas as reported from him by Ali bin Abi Talhah.

Mujahid and several others explained:

"It means, humbleness and reverence.''

"The righteous good deed brings light to the heart, brightness to the face, ampleness in provisions, and love in people's hearts.''

The Leader of the faithful, Uthman bin Affan said,

"Everyone who hides a secret, then Allah the Exalted will either show on his face what he's done or by the words that accidentally slip from his mouth.''

Verily, good conduct, graceful appearance and moderation are one part out of twenty-five parts of Prophethood.

Therefore, since the Companions, may Allah be pleased with them all, had sincere intentions and righteous good deeds, all those who looked at them liked their appearance and conduct.

"I was told that when the Christians saw the Companions, who conquered Ash-Sham, they commented,

`These people are, by Allah, better than the Disciples (of `Isa) according to what has been conveyed to us.'''

They indeed said the truth, for this Ummah was mentioned in an honorable way in previously revealed Scriptures. The best and most honored members of this Ummah are the Companions of the Messenger of Allah.

Allah, the Exalted and Most Honored, praised them in previous Books and Revelations, and this is why He said here,

This is their description in the Tawrah,

But their description in the Injil is like a seed which sends forth its shoot (Shat`ah) (its shoot or branch),

then makes it strong, (able to stand on its own),

and becomes thick, (youthful and long),

and it stands straight on its stem, delighting the sowers,

Such is the parable that describes the Companions of Allah's Messenger. They gave the Messenger aid, support and victory, just as the shoot hardens the plant,

that He may enrage the disbelievers with them.

Relying on this Ayah, Imam Malik stated that the Rawafid are disbelievers because they hate the Companions, may Allah be pleased with them all.

"The Companions enrage them, and according to this Ayah, he who is enraged by the Companions is a disbeliever.''

Several scholars agreed with Malik's opinion, may Allah be pleased with them.

There are numerous Hadiths mentioning the virtues of the Companions and prohibiting the criticism on their mistakes. It is sufficient that Allah the Exalted has praised them and declared that He is pleased with them. Allah the Exalted and Most Honored said,

Allah has promised those among them who believe and do righteous deeds, forgiveness, (for their sins),

and a mighty reward.

a generous reward and honorable provisions.

Certainly, Allah's promise is true and shall come to pass and will never be broken or changed. Surely, all those who follow the guidance of the Companions, may Allah be pleased with them all, will be similar to them. However, the Companions have the better virtue, the obvious lead and the perfection in character, on account of which none among this Ummah will be able to attain their level. May Allah be pleased with them and make them pleased. May He place them in the gardens of Al-Firdaws, and make it their abode, and He indeed has done all of that.

In his Sahih, Muslim recorded that Abu Hurayrah said that the Messenger of Allah said,

Do not abuse my Companions, for by the One in Whose Hand is my soul! If one of you spends the amount of Uhud in gold, that amount will never reach the level of one of them spending a Mudd half of it.

This is the end of the Tafsir of Surah Al-Fath; all praise and thanks is due to Allah.