IBRAHIM (AS) (ABRAHAM), CITY, INHABITANT, SHU‘AYB (AS) AND MADYAN, MESSENGER, SELF (NAFS), NEWS, SALIH (AS) AND THAMUD, TO) WRONG 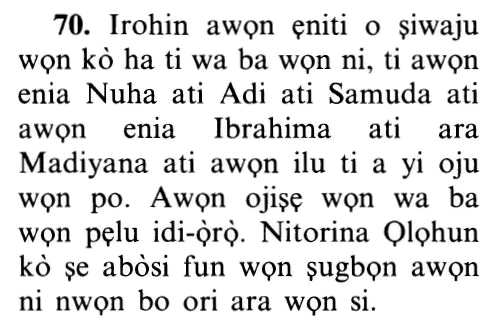 Hath not the story reached them of those before them?- the People of Noah, and 'Ad, and Thamud; the People of Abraham, the men of Midian, and the cities overthrown. To them came their messengers with clear signs. It is not Allah Who wrongs them, but they wrong their own souls.
Has not the news of those before them come to them; of the people of Nuh and Ad and Samood, and the people of Ibrahim and the dwellers of Madyan and the overthrown cities; their messengers came to them with clear arguments; so it was not Allah Who should do them injustice, but they were unjust to themselves.
Hath not the fame of those before them reached them - the folk of Noah, A'ad, Thamud, the folk of Abraham, the dwellers of Midian and the disasters (which befell them)? Their messengers (from Allah) came unto them with proofs (of Allah's Sovereignty). So Allah surely wronged them not, but they did wrong themselves.

Advising the Hypocrites to learn a Lesson from Those before Them

Allah advises the hypocrites who reject the Messengers,

Has not the story reached them of those before them!

have you (hypocrites) not learned the end of the nations before you who rejected the Messengers,

The people of Nuh,

and the flood that drowned the entire population of the earth, except those who believed in Allah's servant and Messenger Nuh, peace be upon him,

who perished with the barren wind when they rejected Hud, peace be upon him,

who were overtaken by the Sayhah (awful cry) when they denied Salih, peace be upon him, and killed the camel,

and the people of Ibrahim,

over whom He gave Ibrahim victory and the aid of clear miracles. Allah destroyed their king Nimrod, son of Canaan, son of Koch from Canaan, may Allah curse him,

and the dwellers of Madyan,

the people of Shu`ayb, peace be upon him, who were destroyed by the earthquake and the torment of the day of the Shade,

and the overturned cities,

the people of Lut who used to live in Madyan.

meaning the people of the overturned cities in reference to Sadum (Sodom), their major city. Allah destroyed them all because they rejected Allah's Prophet Lut, peace be upon him, and because they committed the sin that none before them had committed (homosexuality).

to them came their Messengers with clear proofs.

So it was not Allah Who wronged them,

when He destroyed them, for He established the proofs against them by sending the Messengers and dissipating the doubts,

but they used to wrong themselves.

on account of their denying the Messengers and defying the Truth; this is why they earned the end, torment and punishment, that they did.