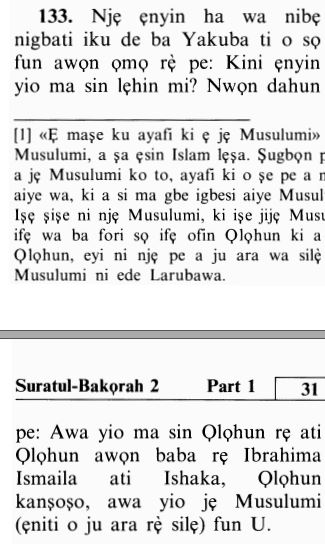 (Or were ye present when death came to Jacobﾅ) [2:133]. This was revealed about the Jews when they said: ﾓDo you not know that when Jacob was about to die he advised his sons to follow Judaism?ﾔ

Yaqub's Will and Testament to His Children upon His Death
Allah tells;
أَمْ كُنتُمْ شُهَدَاء إِذْ حَضَرَ يَعْقُوبَ الْمَوْتُ إِذْ قَالَ لِبَنِيهِ ...
Or were you witnesses when death approached Yaqub (Jacob) When he said unto his sons, "What will you worship after me?''
This Ayah contains Allah's criticism of the Arab pagans among the offspring of Ismail as well as the disbelievers among the Children of Israel Jacob the son of Isaac, the son of Ibrahim. When death came to Jacob, he advised his children to worship Allah alone without partners.
He said to them,
... مَا تَعْبُدُونَ مِن بَعْدِي قَالُواْ نَعْبُدُ إِلَـهَكَ وَإِلَـهَ آبَائِكَ إِبْرَاهِيمَ وَإِسْمَاعِيلَ وَإِسْحَقَ ...
"What will you worship after me''
They said, "We shall worship your Ilah (God ـ Allah) the Ilah of your fathers, Ibrahim, Ismail, Ishaq,''
Mentioning Ismail here is a figure of speech, because Ismail is Jacob's uncle. An-Nahas said that the Arabs call the uncle a father, as Al-Qurtubi mentioned.
This Ayah is used as evidence that; the grandfather is called a father and inherits, rather than the brothers (i.e. when his son dies), as Abu Bakr asserted, according to Al-Bukhari who narrated Abu Bakr's statement from Ibn Abbas and Ibn Az-Zubayr.
Al-Bukhari then commented that there are no opposing opinions regarding this subject. This is also the opinion of Aishah the Mother of the believers, Al-Hasan Al-Basri, Tawus and Ata, Malik, Ash-Shafii and Ahmad said that the inheritance is divided between the grandfather and the brothers. It was reported that this was also the opinion of Umar, Uthman, Ali, bin Mas`ud, Zayd bin Thabit and several scholars among the Salaf and later generations.
The statement,
... إِلَـهًا وَاحِدًا ...
One Ilah (God), means, "We single Him out in divinity and do not associate anything or anyone with Him.''
... وَنَحْنُ لَهُ مُسْلِمُونَ ﴿١٣٣﴾
And to Him we submit, in obedience meaning, obedient and submissiveness.
Similarly, Allah said,
وَلَهُ أَسْلَمَ مَن فِى السَّمَـوَتِ وَالاٌّرْضِ طَوْعًا وَكَرْهًا وَإِلَيْهِ يُرْجَعُونَ
While to Him submitted all creatures in the heavens and the earth, willingly or unwillingly. And to Him shall they all be returned. (3:83)
Indeed, Islam is the religion of all the Prophets, even if their respective laws differed.
Allah said,
وَمَآ أَرْسَلْنَا مِن قَبْلِكَ مِن رَّسُولٍ إِلاَّ نُوحِى إِلَيْهِ أَنَّهُ لا إِلَـهَ إِلاَّ أَنَاْ فَاعْبُدُونِ
And We did not send any Messenger before you (O Muhammad) ﴿but We revealed to him (saying): La ilaha illa Ana (none has the right to be worshipped but I (Allah)), so worship Me (alone and none else). (21:25)
There are many other Ayat - and Hadiths - on this subject. For instance, the Prophet said,
نَحْنُ مَعْشَرَ الْأَنْبِيَاءِ أَوْلَادُ عَلَّاتٍ دِينُنا وَاحِد
We, the Prophets, are brothers with different mothers, but the same religion.