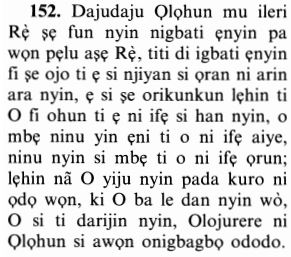 Allah did indeed fulfil His promise to you when ye with His permission Were about to annihilate your enemy,-until ye flinched and fell to disputing about the order, and disobeyed it after He brought you in sight (of the booty) which ye covet. Among you are some that hanker after this world and some that desire the Hereafter. Then did He divert you from your foes in order to test you but He forgave you: For Allah is full of grace to those who believe.
And certainly Allah made good to you His promise when you slew them by His permission, until when you became weak-hearted and disputed about the affair and disobeyed after He had shown you that which you loved; of you were some who desired this world and of you were some who desired the hereafter; then He turned you away from them that He might try you; and He has certainly pardoned you, and Allah is Gracious to the believers.
Allah verily made good His promise unto you when ye routed them by His leave, until (the moment) when your courage failed you, and ye disagreed about the order and ye disobeyed, after He had shown you that for which ye long. Some of you desired the world, and some of you desired the Hereafter. Therefore He made you flee from them, that He might try you. Yet now He hath forgiven you. Allah is a Lord of Kindness to believers.

(Allah verily made good His promise unto youﾅ) [3:152]. Said Muhammad ibn Kab al-Qurazi: ﾓWhen the Messenger of Allah, Allah bless him and give him peace, returned to Medina after that with which they were afflicted at Uhud, some of his Companions said: From whence did this come to us when Allah has promised
us victory?ﾒ And so Allah, exalted is He, revealed this verse (Allah verily made good His promise unto you) up to His saying (Some of you desired the worldﾅ), i.e. the marksmen who did what they did at Uhudﾔ.

And Allah did indeed fulfill His promise to you,

in the beginning of the day of Uhud.

when you were killing them,

for He allowed you to do that against them,

and fell to disputing about the order, and disobeyed,

such as the mistake made by the archers.

after He showed you what you love,

that is, victory over the disbelievers.

Among you are some that desire this world,

referring to those who sought to collect the booty when they saw the enemy being defeated.

and some that desire the Hereafter. Then He made you flee from them, that He might test you.

This Ayah means, Allah gave them the upper hand to try and test you, O believers.

but surely, He forgave you,

He forgave the error you committed, because, and Allah knows best, the idolators were many and well supplied, while Muslims had few men and few supplies.

and Allah is Most Gracious to the believers.

"We met the idolators on that day (Uhud) and the Prophet appointed Abdullah bin Jubayr as the commander of the archers.

The disbelievers gave flight when we met them, and we saw their women fleeing up the mountain while lifting up their clothes revealing their anklets and their legs. So, the companions (of Abdullah bin Jubayr) said, `The booty, the booty!'

Abdullah bin Jubayr said, `Allah's Messenger commanded me not to allow you to abandon your position.'

They refused to listen, and when they left their position, Muslims were defeated and seventy of them were killed.

Abu Sufyan shouted, `Is Muhammad present among these people?'

Then he asked, `Is the son of Abu Quhafah (Abu Bakr) present among these people?'

He asked again, `Is the son of Al-Khattab (Umar) present among these people As for these (men), they have been killed, for had they been alive, they would have answered me.'

Umar could not control himself and said (to Abu Sufyan), `You lie, O enemy of Allah! The cause of your misery is still present.'

On that the Prophet said (to his Companions), `Answer him back.'

They said, `What shall we say?'

He said, `Say, Allah is Higher and more Sublime.'

Abu Sufyan said, `We have the (idol) Al-Uzza, and you have no Uzza.'

The Prophet said, `Answer him back.'

They asked, `What shall we say?'

He said, `Say, Allah is our protector and you have no protector.'

Abu Sufyan said, `Our victory today is vengeance for yours in the battle of Badr, and in war (the victory) is always undecided and is shared in turns by the belligerents. You will find some of your killed men mutilated, but I did not urge my men to do so, yet I do not feel sorry for their deed.'''

Only Al-Bukhari collected this Hadith using this chain of narration.

"By Allah! I saw the female servants and female companions of Hind (Abu Sufyan's wife) when they uncovered their legs and gave flight. At that time, there was no big or small effort separating us from capturing them. However, the archers went down the mount when the enemy gave flight from the battlefield, seeking to collect the booty. They uncovered our back lines to the horsemen of the disbelievers, who took the chance and attacked us from behind.

Then a person shouted, `Muhammad has been killed.'

So we pulled back, and the disbelievers followed us, after we had killed those who carried their flag, and none of them dared to come close the flag, until then.'''

"The flag of the disbelievers was left on the ground until Amrah bint Alqamah Al-Harithiyyah picked it up and gave it to the Quraysh who held it.''

Allah said, ثُمَّ صَرَفَكُمْ عَنْهُمْ لِيَبْتَلِيَكُمْ (Then He made you flee from them, that He might test you),

"My uncle Anas bin An-Nadr was absent from the battle of Badr. He said, `I was absent from the first battle the Prophet fought (against the pagans). (By Allah) if Allah gives me a chance to fight along with the Messenger of Allah, then Allah will see how (bravely) I will fight.'

On the day of Uhud when the Muslims turned their backs and fled, he said, `O Allah! I apologize to You for what these (meaning the Muslims) have done, and I denounce what these pagans have done.'

Then he advanced lifting his sword, and when Sa`d bin Mu`adh met him, he said to him, `O Sa`d bin Mu`adh! Where are you! Paradise! I am smelling its aroma coming from before (Mount) Uhud,' and he went forth, fought and was killed.

We found more than eighty stab wounds, sword blows or arrow holes on his body, which was mutilated so badly that none except his sister could recognize him, and she could only do so by his fingers or by a mole.''

This is the narration reported by Al-Bukhari, Muslim also collected a similar narration from Thabit from Anas.