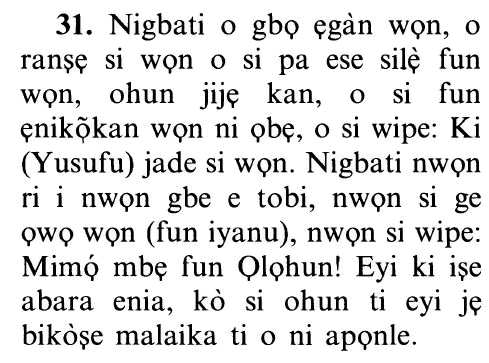 (So when she heard of their accusation,) especially their statement, "indeed she loves him violently.'' Muhammad bin Ishaq commented, "They heard of Yusuf's beauty and wanted to see him, so they said these words in order to get a look at him. '' This is when,

she sent for them,

invited them to her house,

and prepared a banquet for them.

she prepared a sitting room which had couches, pillows (to recline on) and food that requires knives to cut, such as citron.

This is why Allah said next,

and she gave each one of them a knife,

as a part of her plan of revenge for their plot to see Yusuf,

for she had asked him to stay somewhere else in the house,

he went out and,

they saw him, they exalted him,

they thought highly of him and were astonished at what they saw.

and (in their astonishment) cut their hands.

They started cutting their hands in amazement at his beauty, while thinking that they were cutting the citron with their knives.

Therefore, they injured their hands with the knives they were holding, according to several reports of Tafsir.

after they ate and felt comfortable, and after having placed citron in front of them, giving each one of them a knife, the wife of the Aziz asked them, "Would you like to see Yusuf?''

So she sent for him to come in front of them and when they saw him, they started cutting their hands.

She ordered him to keep coming and going, so that they saw him from all sides, and he went back in while they were still cutting their hands. When they felt the pain, they started screaming and she said to them, "You did all this from one look at him, so how can I be blamed?

They said: "How perfect is Allah! No man is this! This is none other than a noble angel!''

They said to her, "We do not blame you anymore after the sight that we saw.''

They never saw anyone like Yusuf before, for he, peace be upon him, was given half of all beauty.

An authentic Hadith stated that the Messenger of Allah passed by Prophet Yusuf, during the Night of Isra' in the third heaven and commented,

He was given a half of all beauty.

Mujahid and others said (they said):

"We seek refuge from Allah, مَا هَـذَا بَشَرًا (No man is this!)"

"This is none other than a noble angel!''

She said these words to them so that they excuse her behavior, for a man who looks this beautiful and perfect, is worthy of being loved, she thought.