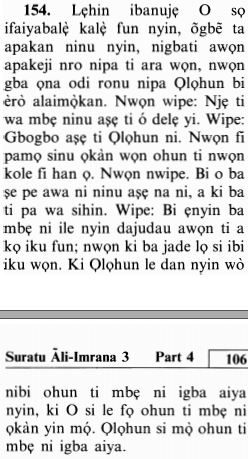 After (the excitement) of the distress, He sent down calm on a band of you overcome with slumber, while another band was stirred to anxiety by their own feelings, Moved by wrong suspicions of Allah-suspicions due to ignorance. They said: "What affair is this of ours?" Say thou: "Indeed, this affair is wholly Allah's." They hide in their minds what they dare not reveal to thee. They say (to themselves): "If we had had anything to do with this affair, We should not have been in the slaughter here." Say: "Even if you had remained in your homes, those for whom death was decreed would certainly have gone forth to the place of their death"; but (all this was) that Allah might test what is in your breasts and purge what is in your hearts. For Allah knoweth well the secrets of your hearts.
Then after sorrow He sent down security upon you, a calm coming upon a party of you, and (there was) another party whom their own souls had rendered anxious; they entertained about Allah thoughts of ignorance quite unjustly, saying: We have no hand in the affair. Say: Surely the affair is wholly (in the hands) of Allah. They conceal within their souls what they would not reveal to you. They say: Had we any hand in the affair, we would not have been slain here. Say: Had you remained in your houses, those for whom slaughter was ordained would certainly have gone forth to the places where they would be slain, and that Allah might test what was in your breasts and that He might purge what was in your hearts; and Allah knows what is in the breasts.
Then, after grief, He sent down security for you. As slumber did it overcome a party of you, while (the other) party, who were anxious on their own account, thought wrongly of Allah, the thought of ignorance. They said: Have we any part in the cause? Say (O Muhammad): The cause belongeth wholly to Allah. They hide within themselves (a thought) which they reveal not unto thee, saying: Had we had any part in the cause we should not have been slain here. Say: Even though ye had been in your houses, those appointed to be slain would have gone forth to the places where they were to lie. (All this hath been) in order that Allah might try what is in your breasts and prove what is in your hearts. Allah is Aware of what is hidden in the breasts (of men).

Slumber Overcame the Believers; the Fear that the Hypocrites Suffered

Then after the distress, He sent down security for you. Slumber overtook a party of you,

Allah reminds His servants of His favor when He sent down on them tranquility and slumber that overcame them while they were carrying their weapons and feeling distress and grief. In this case, slumber is a favor and carries meanings of calmness and safety. For instance, Allah said in Surah Al-Anfal about the battle of Badr,

(Remember) when He covered you with a slumber as a security from Him. (8:11)

"On the day of Uhud, I raised my head and looked around and found that everyone's head was nodding from slumber.''

This is the wording of At-Tirmidhi, who said, "Hasan Sahih''.

An-Nasa'i also recorded this Hadith from Anas who said that Abu Talhah said,

"I was among those who were overcome by slumber.''

The second group mentioned in the Ayah were the hypocrites who only thought about themselves, for they are the most cowardly people and those least likely to support the truth, يَظُنُّونَ بِاللّهِ غَيْرَ الْحَقِّ ظَنَّ الْجَاهِلِيَّةِ (and thought wrongly of Allah - the thought of ignorance) for they are liars and people who have doubts and evil thoughts about Allah, the Exalted and Most Honored.

Then after the distress, He sent down security for you. Slumber overtook a party of you,

the people of faith, certainty, firmness and reliance (on Allah) who are certain that Allah shall give victory to His Messenger and fulfill his objective.

While another party was thinking about themselves,

and they were not overcome by slumber because of their worry, fright and fear.

and thought wrongly of Allah --- the thought of ignorance.

Similarly, Allah said in another statement,

Nay, but you thought that the Messenger and the believers would never return to their families. (48:12)

This group thought that the idolators achieved ultimate victory, when their forces took the upper hand in battle, and that Islam and its people would perish. This is typical of people of doubt and hesitation, in the event of a hardship, they fall into such evil thoughts.

Allah then described them that,

"Have we any part in the affair?''

They hide within themselves what they dare not reveal to you. Allah exposed their secrets, that is,

saying: "If we had anything to do with the affair, none of us would have been killed here.''

although they tried to conceal this thought from the Messenger of Allah.

"I was with the Messenger of Allah when fear intensified and Allah sent sleep to us (during the battle of Uhud).

At that time, every man among us (except the hypocrites) was nodding off. By Allah! As if in a dream, I heard the words of Mu`attib bin Qushayr, `If we had anything to do with the affair, none of us would have been killed here.'

I memorized these words of his, which Allah mentioned later on, يَقُولُونَ لَوْ كَانَ لَنَا مِنَ الأَمْرِ شَيْءٌ مَّا قُتِلْنَا هَاهُنَا (saying: "If we had anything to do with the affair, none of us would have been killed here.)''

Say: "Even if you had remained in your homes, those for whom death was decreed would certainly have gone forth to the place of their death,''

meaning, this is Allah's appointed destiny and a decision that will certainly come to pass, and there is no escaping it.

that Allah might test what is in your breasts; and to purify that which was in your hearts,

means, so that He tests you with whatever befell you, to distinguish good from evil and the deeds and statements of the believers from those of the hypocrites.

and Allah is All-Knower of what is in the breasts,

and what the hearts conceal.