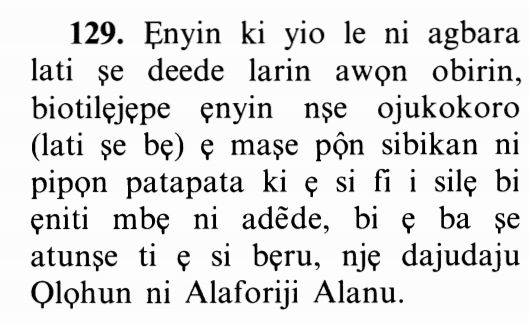 Ye are never able to be fair and just as between women, even if it is your ardent desire: But turn not away (from a woman) altogether, so as to leave her (as it were) hanging (in the air). If ye come to a friendly understanding, and practise self-restraint, Allah is Oft-forgiving, Most Merciful.
And you have it not in your power to do justice between wives, even though you may wish (it), but be not disinclined (from one) with total disinclination, so that you leave her as it were in suspense; and if you effect a reconciliation and guard (against evil), then surely Allah is Forgiving, Merciful.
Ye will not be able to deal equally between (your) wives, however much ye wish (to do so). But turn not altogether away (from one), leaving her as in suspense. If ye do good and keep from evil, lo! Allah is ever Forgiving, Merciful.

You will never be able to do perfect justice between wives even if it is your ardent desire,

means, O people! You will never be able to be perfectly just between wives in every respect. Even when one divides the nights justly between wives, there will still be various degrees concerning love, desire and sexual intimacy.

Imam Ahmad and the collectors of the Sunan recorded that Aishah said,

"The Messenger of Allah used to treat his wives equally and proclaim,

O Allah! This is my division in what I own, so do not blame me for what You own and I do not own, (referring to his heart).

This was the wording that Abu Dawud collected, and its chain of narrators is Sahih.

so do not incline too much to one of them,

means, when you like one of your wives more than others, do not exaggerate in treating her that way.

so as to leave the other hanging.

referring to the other wives.

Mu`allaqah (hanging) means, "She is neither divorced nor married.''

Whoever has two wives and inclines to one of them (too much), will come on the Day of Resurrection with one of his sides dragging.

And if you do justice, and do all that is right and have Taqwa, then Allah is Ever Oft-Forgiving, Most Merciful.

The Ayah states: If you do justice and divide equally in what you have power over, while fearing Allah in all conditions, then Allah will forgive you the favoritism that you showed to some of your wives.