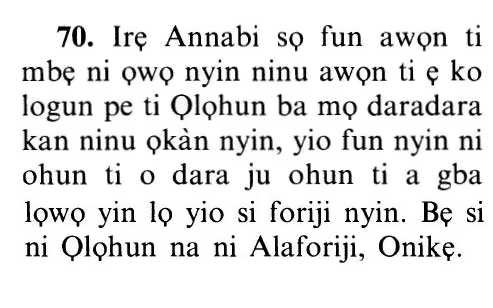 (O Prophet! Say unto those captives who are in your handsﾅ) [8:70]. Said al-Kalbi: ﾓThis was revealed about al-Abbas ibn Abd al-Muttalib, Aqil ibn Abi Talib and Nawfal ibn al-Harith. Al-Abbas was imprisoned at Badr while he had with him twenty Uqiyyah of gold which he had taken with him to Badr to feed the idolaters. He was one of ten men who had taken it upon themselves to feed the entire army of the unbelievers. His turn to finance the army of the unbelievers had not come yet when he fell prisoner, and so it was taken with him, and the Messenger of Allah, Allah bless him and give him peace, then took the gold from him. He said: I spoke with the Messenger of Allah, Allah bless him and give him peace, to take the twenty Uqiyyah of gold which he took from me as my ransom. He refused and said: We will not accept as your ransom something with which you had left to use against usﾒ. The ransom of my nephew Aqil ibn Abi Talib cost me twenty measures of silver, and so I said to him: By Allah, you have left me begging Quraysh for the rest of my lifeﾒ. He said: And where is the gold you gave to Umm Fadl before you headed toward Badr? You said to her: If anything were to happen to me, this is for you and for Abd Allah, al-Fadl and Quthamﾒ. I said: Who informed you about this? He replied: Allah informed me about it. I said: I bear witness that you are truthful. I gave her the gold and none but Allah knew about it. I bear witness that there is no god but Allah and that you are the Messenger of Allahﾒ. Al-Abbas said: And Allah gave me much better than he took from me, as He said. I had twenty slaves all of whom were tending abundant riches instead of the twenty Uqiyyah of gold, and I still hope to gain forgiveness from my Lordﾒ

Pagan Prisoners at Badr were promised better than what They lost, if They become Righteous in the Future

Muhammad bin Ishaq reported that Abdullah bin Abbas said that before the battle of Badr, the Messenger of Allah said,

Abu Hudhayfah bin Utbah said, "Shall we kill our fathers, children, brothers and tribesmen (from Quraysh), and leave Al-Abbas By Allah! If I meet him, I will kill him with the sword.''

When this reached the Messenger of Allah, he said to Umar bin Al-Khattab, يَا أَبَا حَفْص O Abu Hafs!

and Umar said, "By Allah that was the first time that the Messenger of Allah called me Abu Hafs.''

Will the face of the Messenger of Allah's uncle be struck with the sword!

Umar said, "O Allah's Messenger! Give me permission to cut off his neck (meaning Abu Hudhayfah) for he has fallen into hypocrisy, by Allah!''

Ever since that happened, Abu Hudhayfah used to say, "By Allah! I do not feel safe from this statement coming back to haunt me, and I will continue to fear its repercussions, unless Allah, the Exalted, forgives me for it through martyrdom.''

Abu Hudhayfah was martyred during the battle of Al-Yamamah, may Allah be pleased with him.

"On the eve after Badr, the Messenger of Allah spent the first part of the night awake, while the prisoners were bound. His Companions said to him, `O Allah's Messenger! Why do you not sleep!'

Al-Abbas had been captured by a man from Al-Ansar, and the Messenger of Allah said to them,

I heard the cries of pain from my uncle Al-Abbas, because of his shackles, so untie him.

When his uncle stopped crying from pain, Allah's Messenger went to sleep.''

In his Sahih, Al-Bukhari recorded a Hadith from Musa bin Uqbah who said that Ibn Shihab said that Anas bin Malik said that;

some men from Al-Ansar said to the Messenger of Allah, "O Allah's Messenger! Give us permission and we will set free our maternal cousin Al-Abbas without taking ransom from him.''

No, by Allah! Do not leave any Dirham of it.

And from Yunus Bikkir, from Muhammad bin Ishaq, from Yazid bin Ruwman, from Urwah, from Az-Zuhri that several people said to him,

Al-Abbas said, `O Allah's Messenger! I became a Muslims before.'

Allah knows if you are Muslim! If what you are claiming is true, then Allah will compensate you. As for your outward appearance, it was against us. Therefore, ransom yourself, as well as, your nephews Nawfal bin Al-Harith bin Abdul-Muttalib and Aqil bin Abu Talib bin Abdul-Muttalib, and also your ally Utbah bin `Amr, from Bani Al-Harith bin Fihr.

Al-Abbas said, `I do not have that (money), O Allah's Messenger!'

What about the wealth that you and Umm Al-Fadl buried, and you said to her, `If I am killed in this battle, then this money that I buried is for my children Al-Fadl, Abdullah and Quthm.

No, for that was money that Allah made as war spoils for us from you.

So Al-Abbas ransomed himself, his two nephews and an ally, and Allah revealed this verse,

O Prophet! Say to the captives that are in your hands: "If Allah knows any good in your hearts, He will give you something better than what has been taken from you, and He will forgive you, and Allah is Oft-Forgiving, Most Merciful.'' (8:70)

Al-Abbas commented, `After I became Muslim, Allah gave me twenty servants in place of the twenty Uwqiyah I lost. And I hope for Allah's forgiveness.''

"The Prophet was brought some wealth from Bahrain and said;

Distribute it in my Masjid,

and it was the biggest amount of goods Allah's Messenger had ever received. He left for prayer and did not even look at the goods. After finishing the prayer, he sat by those goods and gave some of it to everybody he saw. Al-Abbas came to him and said, `O Allah's Messenger! give me (something) too, because I gave ransom for myself and Aqil.'

Allah's Messenger told him to take. So he stuffed his garment with it and tried to carry it away but he failed to do so.

He said, `Order someone to help me in lifting it.'

He then said to the Prophet, `Will you please help me to lift it!'

Then Al-Abbas dropped some of it and lifted it on his shoulders and went away.

Al-Bukhari also collected this Hadith in several places of his Sahih with an abridged chain, in a manner indicating his approval of it.