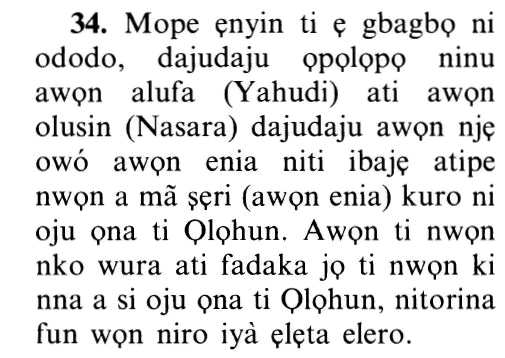 O you who believe! Verily, there are many of the Ahbar (rabbis) and the Ruhban (monks) who,

the Ahbar are Jewish rabbis, while the Ruhban are Christian monks.

This statement is true, for Ahbar are Jewish rabbis, just as Allah said,

Why do not the Ahbar (rabbis) and the religious learned men forbid them from uttering sinful words and eating unlawful things. (5:63)

The Ruhban are Christian monks or worshippers, while the `Qissisun' are their scholars.

This is because among them, there are Qissisin and Ruhban... (5:82)

This Ayah warns against corrupt scholars and misguided worshippers.

You will follow the ways of those who were before you, step by step.

They asked, "Jews and Christians?''

In another narration, they asked, "Persia and Rome?''

And who else if it was not them?

These texts warn against imitating them in action and statement, for they, as Allah stated,

devour the wealth of mankind in falsehood, and hinder (them) from the way of Allah.

They sell the religion in return for worldly gains, using their positions and status among people to illegally devour their property.

For instance, the Jews were respected by the people of Jahiliyyah and collected gifts, taxes and presents from them.

When Allah sent His Messenger, the Jews persisted in their misguidance, disbelief and rebellion, hoping to keep their status and position. However, Allah extinguished all this and took it away from them with the light of Prophethood and instead gave them disgrace and degradation, and they incurred the anger of Allah, the Exalted.

and hinder (them) from the way of Allah.

Therefore, they illegally devour people's property and hinder them from following the truth.

They also confuse truth with falsehood and pretend before their ignorant followers that they call to righteousness.

The true reality is that they call to the Fire and will not find any helpers on the Day of Resurrection.

Torment of Those Who hoard Gold and Silver

And those who hoard (Kanz) gold and silver and spend them not in the way of Allah, announce unto them a painful torment.

This is the third category of leaders, for people rely on their scholars, worshippers and the wealthy among them. When these categories of people become corrupt, the society in general becomes corrupt.

"What corrupted the religion, except kings and wicked Ahbar and Ruhban.''

As for Kanz, it refers to the wealth on which Zakah has not been paid, according to Malik, who narrated this from Abdullah bin Dinar from Ibn Umar that.

Umar bin Abdul-`Aziz and Irak bin Malik said that this Ayah was abrogated by Allah's statement,

There are many Hadiths that admonish hoarding gold and silver. We will mention here some of these Hadiths.

Abdur-Razzaq recorded a Hadith from Ali about Allah's statement, وَالَّذِينَ يَكْنِزُونَ الذَّهَبَ وَالْفِضَّة (And those who hoard up gold and silver...) Ali said that the Prophet said,

Woe to gold! Woe to silver.

He repeated this statement thrice, and this Hadith was hard on the Companions of the Messenger of Allah, who said, "What type of wealth should we use!''

Umar said, "I will find out for you,'' and he asked, "O Allah's Messenger! Your statement was hard for your Companions. They asked, `What wealth should we use?'''

A remembering tongue, an appreciative heart and a wife that helps one of you implement his religion.