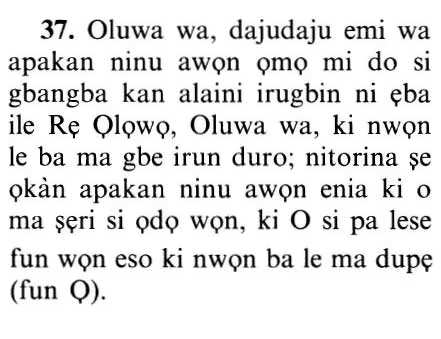 "O our Lord! I have made some of my offspring dwell in an uncultivable valley by Your Sacred House in order, O our Lord, that they may perform Salah.

This Ayah indicates that this was different supplication than the first one that Ibrahim said when he left Hajar and her son Ismail in Makkah, before the Sacred House was built.

This prayer, it appears, was said after the House was built, begging Allah and seeking His favor, and He is the Exalted and Most Honored.

Ibn Jarir At-Tabari commented that this,

"Refers to his earlier statement,

meaning, `You have made this House Sacred so that people establish the prayer next to it,'

So fill some hearts among men with love towards them,

"Had Ibrahim said, `The hearts of mankind', Persians, Romans, the Jews, the Christians and all other people would have gathered around it.''

However, Ibrahim said, مِّنَ النَّاسِ (among men), thus making it exclusive to Muslims only.

and (O Allah) provide them with fruits

in order that they may be helped in obeying You, and because this is a barren valley; bring to them fruits that they might eat.

so that they may give thanks.

Have We not established for them a secure sanctuary (Makkah), to which are brought fruits of all kinds, a provision from Ourselves. (28:57)

This only indicates Allah's compassion, kindness, mercy and blessing, in that there are no fruit producing trees in the Sacred City, Makkah, yet all kinds of fruits are being brought to it from all around; this is how Allah accepted the supplication of the Khalil - Allah's intimate friend, Prophet Ibrahim, peace be upon him.