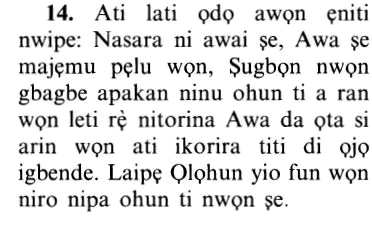 From those, too, who call themselves Christians, We did take a covenant, but they forgot a good part of the message that was sent them: so we estranged them, with enmity and hatred between the one and the other, to the day of judgment. And soon will Allah show them what it is they have done.
And with those who say, We are Christians, We made a covenant, but they neglected a portion of what they were reminded of, therefore We excited among them enmity and hatred to the day of resurrection; and Allah will inform them of what they did.
And with those who say: &quot;Lo! we are Christians,&quot; We made a covenant, but they forgot a part of that whereof they were admonished. Therefor We have stirred up enmity and hatred among them till the Day of Resurrection, when Allah will inform them of their handiwork.

And from those who call themselves Christians, We took their covenant,

Meaning: `From those who call themselves Christians and followers of `Isa, son of Maryam, while in fact they are not as they claim. We took from them the covenant and pledges that they would follow the Prophet, aid him, honor him and follow his footsteps.' And that they would believe in every Prophet whom Allah sends to the people of the earth. They imitated the Jews and broke the promises and the pledges.

but they have abandoned a good part of the Message that was sent to them. So We planted amongst them enmity and hatred till the Day of Resurrection;

Meaning: `We planted enmity and hatred between them, and they will remain like this until the Day of Resurrection.'

Indeed, the numerous Christian sects have always been enemies and adversaries of each other, accusing each other of heresy and cursing each other. Each sect among them excommunicates the other sects and does not allow them entrance to their places of worship.

The Monarchist sect accuses the Jacobite sect of heresy, and such is the case with the Nestorians and the Arians. Each sect among them will continue to accuse the other of disbelief and heresy in this life and on the Day when the Witnesses will come forth.

and Allah will inform them of what they used to do.

warning and threatening the Christians because of their lies against Allah and His Messenger and their false claims about Allah, hallowed be He above what they say about Him. The Christians attribute a companion and a son to Allah, while He is the One and Only, the All-Sufficient, Who neither begets nor was He begotten, and there is none like unto Him.