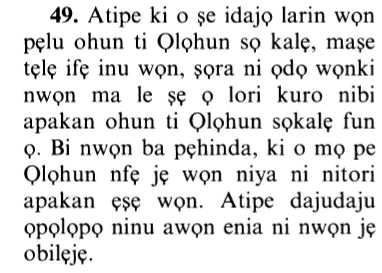 (So judge between them by that which Allah hath revealedﾅ) [5:49]. Said Ibn Abbas: ﾓA group of Jews which included Kab ibn Asad, Abd Allah ibn Suriya and Shas ibn Qays said to each other: Let us go to Muhammad lest we seduce him from his religionﾒ. When they went to him, they said: O Muhammad, you know that we are the rabbis and nobles of the Jews, and if we were to follow you, the Jews will follow us without objection. We will believe in you and confirm your message in exchange for a favour: we have a dispute with some people and we want you to judge in our favour against themﾒ. The Messenger of Allah, Allah bless him and give him peace, refused to do so, and Allah, exalted is He, revealed about them (ﾅ but beware of them lest they seduce thee from some part of that which Allah hath revealed unto theeﾅ)ﾔ.

And so judge between them by what Allah has revealed and follow not their vain desires,

emphasizes this command and forbids ignoring it.

but beware of them lest they turn you far away from some of that which Allah has sent down to you.

meaning; beware of the Jews, your enemies, lest they distort the truth for you in what they convey to you. Therefore, do not be deceived by them, for they are liars, treacherous and disbelievers.

And if they turn away,

from the judgment that you pass in their disputes, and they defy Allah's Law.

then know that Allah's will is to punish them for some sins of theirs.

meaning, know that this will occur according to the decree of Allah, and because out of His wisdom they have deviated from the truth, and because of their previous sins.

And truly, most men are rebellious.

Therefore, the majority of humans are disobedient to their Lord, defiant of the truth and deviate away from it.

And most people will not believe even if you desire it eagerly. (12:103)

And if you obey most of those on the earth they will mislead you far away from Allah's path. (6:116)

"Ka`b bin Asad, Ibn Saluba, Abdullah bin Surya and Shas bin Qays said to each other, `Let us go to Muhammad to try and misguide him from his religion.'

So they went to the Prophet and said, `O Muhammad! You know that we are the scholars, noblemen and chiefs of the Jews. If we follow you, the Jews will follow suit and will not contradict us. But, there is enmity between us and some of our people, so we will refer to you for judgment in this matter, and you should rule in our favor against them and we will believe in you.'

The Messenger of Allah refused the offer and Allah sent down these Ayat about them,

And so judge between them by what Allah has revealed and follow not their vain desires, but beware of them lest they turn you far away from some of that which Allah has sent down to you.) until, لِّقَوْمٍ يُوقِنُونَ (for a people who have firm faith.)'' (5:49-50)