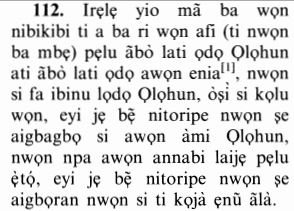 Indignity is put over them wherever they may be, except when under a covenant (of protection) from Allah, and a covenant from men;

meaning, Allah has placed humiliation and disgrace on them wherever they may be, and they will never be safe, إِلاَّ بِحَبْلٍ مِّنْ اللّهِ (except when under a covenant from Allah), under the Dhimmah (covenant of protection) from Allah that requires them to pay the Jizyah (tax, to Muslims,) and makes them subservient to Islamic Law.

meaning, covenant from men, such as pledges of protection and safety offered to them by Muslim men and women, and even a slave, according to one of the sayings of the scholars.

refers to a covenant of protection from Allah and a pledge of safety from people.

they have drawn on themselves the wrath of Allah,

means, they earned Allah's anger, which they deserved.

and destitution is put over them,

meaning they deserve it by decree and legislatively.

This is because they disbelieved in the Ayat of Allah and killed the Prophets without right.

meaning, what drove them to this was their arrogance, transgression and envy, earning them humiliation, degradation and disgrace throughout this life and the Hereafter.

This is because they disobeyed and used to transgress (the limits set by Allah).

meaning, what lured them to disbelieve in Allah's Ayat and kill His Messengers, is the fact that they often disobeyed Allah's commands, committed His prohibitions and transgressed His set limits.

We seek refuge from this behavior, and Allah Alone is sought for each and every type of help.