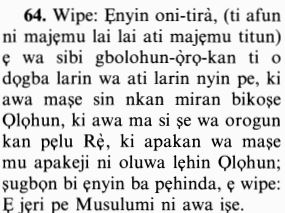 Every Person Knows about Tawhid

This Ayah includes the People of the Book, the Jews and Christians, and those who follow their ways.

Say: "O people of the Scripture! Come to a word.''

`Word' - in Arabic - also means a complete sentence, as evident from this Ayah. Allah described this word as being one,

that is the same between us and you,

an honest and righteous word that is fair to both parties.

Allah then explained this word,

that we worship none but Allah (Alone), and that we associate no partners with Him,

we worship neither a statue, cross, idol, Taghut (false gods), fire or anything else. Rather, we worship Allah Alone without partners, and this is the message of all of Allah's Messengers.

And We did not send any Messenger before you but We revealed to him (saying): "None has the right to be worshipped but I (Allah), so worship Me (Alone and none else).'' (21:25)

And verily, We have sent among every Ummah a Messenger (proclaiming): "Worship Allah (Alone), and avoid (or keep away from) Taghut (all false deities).'' (16:36)

"and that none of us shall take others as lords besides Allah.''

"We do not obey each other in disobedience to Allah.''

Then, if they turn away, say: "Bear witness that we are Muslims.''

if they abandon this fair call, then let them know that you will remain in Islam as Allah has legislated for you.

We should mention that the letter that the Prophet sent to Heraclius reads,

"In the Name of Allah, the Most Gracious, the Most Merciful.

From Muhammad, the Messenger of Allah, to Heraclius, Leader of the Romans:

peace be upon those who follow the true guidance. Embrace Islam and you will acquire safety, embrace Islam and Allah will grant you a double reward. However, if you turn away from it, then you will carry the burden of the peasants,

"O people of the Scripture: Come to a word that is the same between us and you, that we worship none but Allah (Alone), and that we associate no partners with Him, and that none of us shall take others as lords besides Allah.''

Muhammad bin Ishaq and other scholars said that;

the beginning of Surah Al Imran, and more than eighty verses thereafter; were revealed about the delegation of Najran.

the people of Najran were the first people to pay the Jizyah (tax money paid to the Muslim State). However, there is no disagreement that the Ayah that ordained the Jizyah (9:29) was revealed after the Fath (conquering Makkah, and therefore, after the delegation of Najran came to Al-Madinah).

So, how can this Ayah (3:64) be contained in the Prophet's letter to Heraclius before the victory of Makkah, and how can we harmonize between the statements of Muhammad bin Ishaq and Az-Zuhri

The answer is that the delegation of Najran came before Al-Hudaybiyyah (before the victory of Makkah), and what they paid was in lieu of the Mubahalah; not as Jizyah.

The Ayah about the Jizyah was later revealed, and its ruling supported what occurred with the Najran people.

In support of this opinion, we should mention that in another instance, the ruling on dividing the booty into one - fifth (for the Prophet) and four-fifths (for the fighters) agreed with the practice of Abdullah bin Jahsh during the raid that he led before Badr.

An Ayah later on upheld the way Abdullah divided the booty. Therefore, it is possible that the Prophet wrote this statement (Say, "O People of the Scripture. ..'') in his letter to Heraclius before the Ayah was revealed. Later on, the Qur'an agreed with the Prophet's statement, word by word.

It is also a fact that the Qur'an was revealed in agreement with what Umar said regarding the captured disbelievers at Badr, the Hijab (Muslim woman code of dress), refraining from performing prayer for the hypocrites, and regarding his statements:

It may be if he divorced you (all) that his Lord will give him instead of you, wives better than you. (66:5)