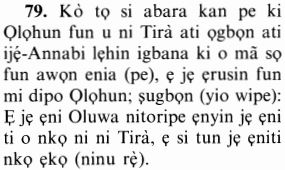 It is not (possible) that a man, to whom is given the Book, and Wisdom, and the prophetic office, should say to people: "Be ye my worshippers rather than Allah's": on the contrary (He would say) "Be ye worshippers of Him Who is truly the Cherisher of all: For ye have taught the Book and ye have studied it earnestly."
It is not meet for a mortal that Allah should give him the Book and the wisdom and prophethood, then he should say to men: Be my servants rather than Allah's; but rather (he would say): Be worshippers of the Lord because of your teaching the Book and your reading (it yourselves).
It is not (possible) for any human being unto whom Allah had given the Scripture and wisdom and the prophethood that he should afterwards have said unto mankind: Be slaves of me instead of Allah; but (what he said was): Be ye faithful servants of the Lord by virtue of your constant teaching of the Scripture and of your constant study thereof.

(It is not (possible) for any human being unto whom Allah had given the Scriptureﾅ) [3:79]. Al-Dahhak and
Muqatil said: ﾓThis was revealed about the Christians of Najran due to their worship of Jesus. His saying
(ﾅfor any human beingﾅ) refers to Jesus and (ﾅhad given the Scriptureﾅ) refers to the Gospelﾔ. And
according to the narration of al-Kalbi and Ataﾒ, Ibn Abbas said: ﾓAbu Rafi the Jew and the head of the
Christians of Najran said: O Muhammad! Do you want us to worship you and take you as our Lord?ﾒ The Messenger of Allah, Allah bless him and give him peace, said: Allah forbid that other than Allah Himself be worshipped or that we be commanded to worship other than Allah. This is not what Allah has sent me for nor did He command me with thisﾒ. And so Allah, exalted is He, revealed this verseﾔ. Said al-Hasan: ﾓI heard that a man said: O Messenger of Allah! [Is it enough that] we greet you as we greet each other? Should we not prostrate to you?ﾒ He said: One ought not to prostrate to anyone besides Allah. Rather, do honour your Prophet, and give people their dueﾒ. Allah, exalted is He, then revealed this verseﾔ.

It is not (possible) for any human being to whom Allah has given the Book and Al-Hukm and Prophethood to say to the people: "Be my worshippers rather than Allah's.''

This criticism refers to the ignorant rabbis, priests and teachers of misguidance, unlike the Messengers and their sincere knowledgeable followers who implement their knowledge; for they only command what Allah commands them, as their honorable Messengers conveyed to them. They also forbid what Allah forbade for them, by the words of His honorable Messengers. The Messengers, may Allah's peace and blessings be on all of them, are the emissaries between Allah and His creation, conveying Allah's Message and Trust. The messengers indeed fulfilled their mission, gave sincere advice to creation and conveyed the truth to them.

On the contrary (he would say), "Be you Rabbaniyyun, because you are teaching the Book, and you are studying it.''

means, the Messenger recommends the people to be Rabbaniyyun.

Ibn Abbas, Abu Razin and several others said that;

Ad-Dahhak commented concerning Allah's statement, بِمَا كُنتُمْ تُعَلِّمُونَ الْكِتَابَ وَبِمَا كُنتُمْ تَدْرُسُونَ (because you are teaching the Book, and you are studying it).

"Whoever learns the Qur'an deserves to become a Faqih (learned).''