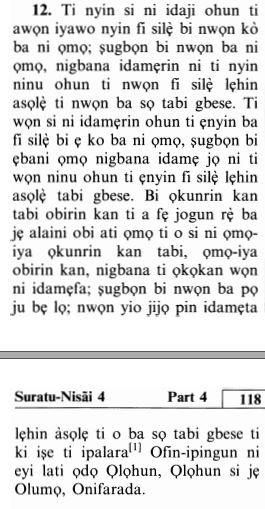 In that which your wives leave, your share is half if they have no child; but if they leave a child, you get a fourth of that which they leave after payment of legacies that they may have bequeathed or debts.

Allah says to the husband, you get half of what your wife leaves behind if she dies and did not have a child. If she had a child, you get one-fourth of what she leaves behind, after payment of legacies that she may have bequeathed, or her debts.

We mentioned before that payment of debts comes before fulfilling the will, and then comes the will, then the inheritance, and there is a consensus on this matter among the scholars. And the rule applies to the grandchildren as well as the children, even if they are great-grandchildren (or even further in generation).

وَلَهُنَّ الرُّبُعُ مِمَّا تَرَكْتُمْ (In that which you leave, their (your wives) share is a fourth) and if there is more than one wife, they all share in the fourth, or one-eighth that the wife gets.

If the man or woman whose inheritance is in question was left in Kalalah,

Kalalah is a derivative of Iklil; the crown that surrounds the head.

The meaning of Kalalah in this Ayah is that the person's heirs come from other than the first degree of relative.

when Abu Bakr As-Siddiq was asked about the meaning of Kalalah, he said, "I will say my own opinion about it, and if it is correct, then this correctness is from Allah. However, if my opinion is wrong, it will be my error and because of the evil efforts of Shaytan, and Allah and His Messenger have nothing to do with it.

Kalalah refers to the man who has neither descendants nor ascendants.''

When Umar became the Khalifah, he said, "I hesitate to contradict an opinion of Abu Bakr.''

This was recorded by Ibn Jarir and others.

"I was among the last persons to see Umar bin Al-Khattab, and he said to me, `What you said was the correct opinion.'

He said, `That Kalalah refers to the person who has no child or parents.'''

This is also the view of the people of Al-Madinah, Kufah, Basra, the Seven Fuqaha, the Four Imams and the majority of scholars of the past and present, causing some scholars to declare that there is a consensus on this opinion.

But has left a brother or a sister,

meaning, from his mother's side, as some of the Salaf stated, including Sa`d bin Abi Waqqas.

Qatadah reported that this is the view of Abu Bakr As-Siddiq.

Each one of the two gets a sixth; but if more than two, they share in a third.

There is a difference between the half brothers from the mother's side and the rest of the heirs.

Second, the males and females among them get the same share.

Fourth, they do not have more than a third, no matter how numerous they were.

After payment of legacies he (or she) may have bequeathed or debts, so that no loss is caused (to anyone).

means, let the will and testament be fair and free of any type of harm, without depriving some rightful heirs from all, or part of their share, or adding to the fixed portion that Allah ordained for some heirs. Indeed, whoever does this, will have disputed with Allah concerning His decision and division.

Allah has given each his fixed due right. Therefore, there is no will for a rightful inheritor.

This is a Commandment from Allah; and Allah is Ever All-Knowing, Most Forbearing.