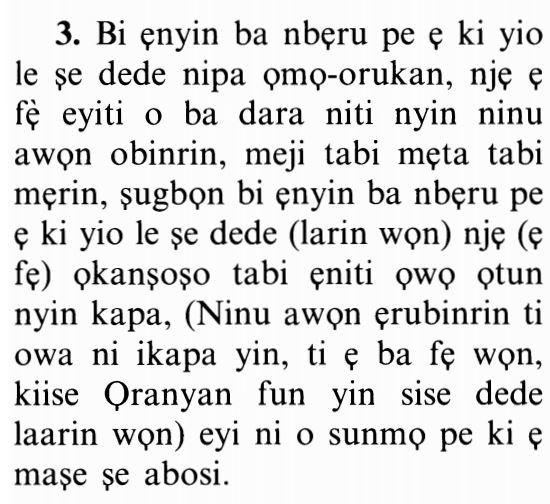 The Prohibition of Marrying Female Orphans Without Giving a Dowry

And if you fear that you shall not be able to deal justly with the orphan girls, then marry (other) women of your choice,

Allah commands, when one of you is the caretaker of a female orphan and he fears that he might not give her a dowry that is suitable for women of her status, he should marry other women, who are plenty as Allah has not restricted him.

"A man was taking care of a female orphan and he married her, although he did not desire to marry her. That girl's money was mixed with his, and he was keeping her portion from her. Afterwards, this Ayah was revealed about his case;

If you fear that you shall not be able to deal justly...''

he asked Aishah about the meaning of the statement of Allah, وَإِنْ خِفْتُمْ أَلاَّ تُقْسِطُواْ فِي الْيَتَامَى (If you fear that you shall not be able to deal justly with the orphan girls).

She said, "O my nephew! This is about the orphan girl who lives with her guardian and shares his property. Her wealth and beauty may tempt him to marry her without giving her an adequate dowry which might have been given by another suitor. So, such guardians were forbidden to marry such orphan girls unless they treated them justly and gave them the most suitable dowry; otherwise they were ordered to marry woman besides them.''

"After that verse, the people again asked the Messenger of Allah (about marriage with orphan girls), so Allah revealed the Ayah, وَيَسْتَفْتُونَكَ فِي النِّسَاء (They ask your instruction concerning the women..)." (4:127)

"Allah's statement in this Ayah, وَتَرْغَبُونَ أَن تَنكِحُوهُنَّ (yet whom you desire to marry) (4:127) refers to the guardian who does not desire to marry an orphan girl under his supervision because she is neither wealthy nor beautiful. The guardians were forbidden to marry their orphan girls possessing property and beauty without being just to them, as they generally refrain from marrying them (when they are neither beautiful nor wealthy).''

The Permission to Marry Four Women

two or three, or four,

means, marry as many women as you like, other than the orphan girls, two, three or four.

We should mention that Allah's statement in another Ayah, جَاعِلِ الْمَلَائِكَةِ رُسُلًا أُولِي أَجْنِحَةٍ مَّثْنَى وَثُلَاثَ وَرُبَاعَ (Who made the angels messengers with wings, - two or three or four), (35:1), does not mean that other angels do not have more than four wings, as there are proofs that some angels do have more wings. Yet, men are prohibited from marrying more than four wives, as the Ayah decrees, since the Ayah specifies what men are allowed of wives, as Ibn Abbas and the majority of scholars stated. If it were allowed for them to have more than four wives, the Ayah would have mentioned it.

Imam Ahmad recorded that Salim said that his father said that;

Ghilan bin Salamah Ath-Thaqafi had ten wives when he became Muslim, and the Prophet said to him, "Choose any four of them (and divorce the rest).''

During the reign of Umar, Ghilan divorced his remaining wives and divided his money between his children.

When Umar heard news of this, he said to Ghilan, "I think that the devil has conveyed to your heart the news of your imminent death, from what the devil hears during his eavesdropping. It may as well be that you will not remain alive but for a little longer. By Allah! You will take back your wives and your money, or I will take possession of this all and will order that your grave be stoned as is the case with the grave of Abu Righal (from Thamud, who was saved from their fate because he was in the Sacred Area. But, when he left it, he was tormented like they were).''

Ash-Shafi`i, At-Tirmidhi, Ibn Majah, Ad-Daraqutni and Al-Bayhaqi collected this Hadith up to the Prophet's statement, "Choose any four of them.''

Only Ahmad collected the full version of this Hadith.

But if you fear that you will not be able to deal justly (with them), then only one or what your right hands possess.

The Ayah commands, if you fear that you will not be able to do justice between your wives by marrying more than one, then marry only one wife, or satisfy yourself with only female captives, for it is not obligatory to treat them equally, rather it is recommended. So if one does so, that is good, and if not, there is no harm on him.

You will never be able to do perfect justice between wives even if it is your ardent desire. (4:129)

That is nearer to prevent you from Ta`ulu,

the Prophet said that the Ayah, ذَلِكَ أَدْنَى أَلاَّ تَعُولُواْ (That is nearer to prevent you from Ta`ulu, means, from doing injustice.

However, Ibn Abi Hatim said that his father said that this Hadith to the Prophet is a mistake, for it should be attributed to Aishah not the Prophet.

Ta`ulu means to deviate (from justice).