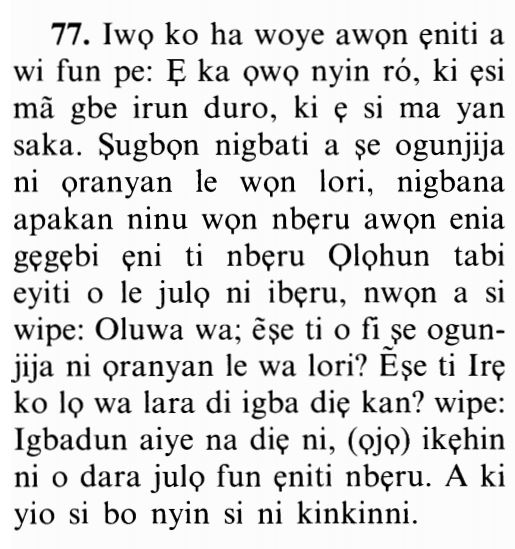 Hast thou not turned Thy vision to those who were told to hold back their hands (from fight) but establish regular prayers and spend in regular charity? When (at length) the order for fighting was issued to them, behold! a section of them feared men as - or even more than - they should have feared Allah: They said: "Our Lord! Why hast Thou ordered us to fight? Wouldst Thou not Grant us respite to our (natural) term, near (enough)?" Say: "Short is the enjoyment of this world: the Hereafter is the best for those who do right: Never will ye be dealt with unjustly in the very least!
Have you not seen those to whom it was said: Withhold your hands, and keep up prayer and pay the poor-rate; but when fighting is prescribed for them, lo! a party of them fear men as they ought to have feared Allah, or (even) with a greater fear, and say: Our Lord! why hast Thou ordained fighting for us? Wherefore didst Thou not grant us a delay to a near end? Say: The provision of this world is short, and the hereafter is better for him who guards (against evil); and you shall not be wronged the husk of a date stone.
Hast thou not seen those unto whom it was said: Withhold your hands, establish worship and pay the poordue, but when fighting was prescribed for them behold! a party of them fear mankind even as their fear of Allah or with greater fear, and say: Our Lord! Why hast Thou ordained fighting for us? If only Thou wouldst give us respite yet a while! Say (unto them, O Muhammad): The comfort of this world is scant; the Hereafter will be better for him who wardeth off (evil); and ye will not be wronged the down upon a date-stone.

The Wish that the Order for Jihad be Delayed

Have you not seen those who were told to hold back their hands (from fighting) and perform Salah and give Zakah, but when the fighting was ordained for them, behold! a section of them fear men as they fear Allah or even more.

In the beginning of Islam, Muslims in Makkah were commanded to perform the prayer and pay some charity, so as to comfort the poor among them. They were also commanded to be forgiving and forbearing with the idolators and to observe patience with them at the time. However, they were eager and anticipating the time when they would be allowed to fight, so that they could punish their enemies.

The situation at that time did not permit armed conflict for many reasons. For instance, Muslims were few at the time, compared to their numerous enemies. The Muslims' city was a sacred one and the most honored area on the earth, and this is why the command to fight was not revealed in Makkah.

Later on when the Muslims controlled a town of their own, Al-Madinah, and had strength, power and support, Jihad was then legislated. Yet, when the command to fight was revealed, just as Muslims wished, some of them became weary and were very fearful of facing the idolators in battle.

They say: "Our Lord! Why have You ordained for us fighting Would that You had granted us respite for a short period!''

meaning, we wish that Jihad was delayed until a later time, because it means bloodshed, orphans and widows. In a similar Ayah, Allah said,

Those who believe say: "Why is not a Surah sent down (for us) But when a decisive is sent down, and fighting is mentioned. (47:20)

Abdur-Rahman bin Awf and several of his companions came to the Prophet while in Makkah and said, "O Allah's Prophet! We were mighty when we were pagans, but when we embraced the faith, we became weak.''

I was commanded to pardon the people, so do not fight them.

When Allah transferred the Prophet to Al-Madinah, He commanded him to fight (the idolators), but they (some Muslims) held back. So, Allah revealed the Ayah; أَلَمْ تَرَ إِلَى الَّذِينَ قِيلَ لَهُمْ كُفُّواْ أَيْدِيَكُمْ (Have you not seen those who were told to hold back their hands).

This Hadith was collected by An-Nasa'i and Al-Hakim.

Say: "Short is the enjoyment of this world. The Hereafter is (far) better for him who fears Allah,

means, the destination of the one who with Taqwa is better for him than this life.

and you shall not be dealt with unjustly even equal to the Fatil.

for your good deeds. Rather, you will earn your full rewards for them.

This promise directs the focus of believers away from this life and makes them eager for the Hereafter, all the while encouraging them to fight in Jihad.