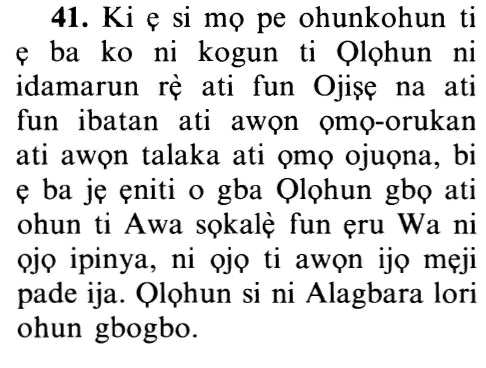 Ruling on the Spoils of War (Ghanimah and Fai )

Allah explains the spoils of war in detail, as He has specifically allowed it for this honorable Ummah over all others.

We should mention that the `Ghanimah' refers to war spoils captured from the disbelievers, using armies and instruments of war.

As for `Fai', it refers to the property of the disbelievers that they forfeit in return for peace, what they leave behind when they die and have no one to inherit from them, and the Jizyah (tribute tax) and Khiraj (property tax).

And know that whatever of war booty that you may gain, verily, one-fifth of it is assigned to Allah,

indicating that the one-fifth should be reserved and paid in full (to Muslim leaders) whether it was little or substantial, even a yarn and needle.

And whosoever deceives (his companions over the booty), he shall bring forth on the Day of Resurrection that which he took (illegally). Then every person shall be paid in full what he has earned, and they shall not be dealt with unjustly. (3:161)

verily, one-fifth of it is assigned to Allah, and to the Messenger,

Ad-Dahhak reported that Ibn Abbas explained by it as,

And know that whatever of war booty that you may gain, verily, one-fifth of it is assigned to Allah, and to the Messenger,

"Allah's statement, فَأَنَّ لِلّهِ خُمُسَهُ (verily, one-fifth of it is assigned to Allah) is inclusive (of the Messenger's share), just as the following Ayah is inclusive (of Allah owning whatever is on the earth also),

the share designated for Allah and the Messenger is one and the same.

Supporting this is what Imam Al-Hafiz Abu Bakr Al-Bayhaqi recorded, with a Sahih chain of narrators, that Abdullah bin Shaqiq said that a man from Bilqin said,

"I came to the Prophet when he was in Wadi Al-Qura inspecting a horse. I asked, `O Allah's Messenger! What about the Ghanimah?'

Allah's share is one fifth and four-fifths are for the army.

I asked, `None of them has more right to it than anyone else?'

No. Even if you remove an arrow that pierced your flank, you have no more right to it than your Muslim brother.''

Al-Miqdam bin Madikarib Al-Kindi sat with Ubadah bin As-Samit, Abu Ad-Darda and Al-Harith bin Mu`awiyah Al-Kindi, may Allah be pleased with them, reminding each other of the statements of the Messenger of Allah.

Abu Ad-Darda said to Ubadah, "O Ubadah! What about the words of the Messenger of Allah during such and such battle, about the fifth (of the war booty)?''

Ubadah said, "The Messenger of Allah led them in prayer, facing a camel from the war booty. When he finished the prayer, he stood up, held pelt of a camel between his fingers and said,

This is also a part of the war booty you earned. Verily, I have no share in it, except my own share, the fifth designated to me. Even that fifth will be given to you (indicating the Prophet's generosity). Therefore, surrender even the needle and the thread, and whatever is bigger or smaller than that (from the war spoils).

Do not cheat with any of it, for stealing from the war booty before its distribution is Fire and a shame on its people in this life and the Hereafter.

Establish Allah's rules while in your area and while traveling.

Perform Jihad in Allah's cause, for Jihad is a tremendous door leading to Paradise. Through it, Allah saves (one) from sadness and grief.''

This is a tremendous Hadith, but I did not find it in any of the six collections of Hadith through this chain of narration.

he Prophet used to choose some types of the war booty for himself; a servant, a horse, or a sword, according to the reports from Muhammad bin Sirin, Amir Ash-Sha`bi and many scholars. For instance, Imam Ahmad and At-Tirmidhi -- who graded it Hasan -- recorded from Ibn Abbas that;

the Messenger of Allah chose a sword called `Dhul-Fiqar' on the day of Badr.

Safiyyah was among the captured women, and the Prophet chose (and married) her (upon his own choice and before distribution of war booty), as Abu Dawud narrated in the Sunan.

and to the near relatives (of the Messenger),

As for the share of the Prophet's relatives, it is paid to Bani Hashim and Bani Al-Muttalib, because the children of Al-Muttalib supported Bani Hashim in Jahiliyyah after Islam. They also went to the mountain pass of Abu Talib in support of the Messenger of Allah and to protect him (when the Quraysh boycotted Muslims for three years). Those who were Muslims (from Bani Al-Muttalib) did all this in obedience to Allah and His Messenger, while the disbelievers among them did so in support of their tribe and in obedience to Abu Talib, the Messenger's uncle.

in reference to Muslim orphans,

the traveler and those who intend to travel for a distance during which shortening the prayer is legislated, but do not have resources to spend from.

We will explain this subject in Surah Bara'h (9:60), Allah willing, and our reliance and trust is in Him alone.

If you have believed in Allah and in that which We sent down to Our servant,

Allah says, `Adhere to what We legislated for you, such as the ruling about one-fifth of the war spoils, if you truly believe in Allah, the Last Day and what We have revealed to Our Messenger.'

In the Two Sahihs, it is recorded that Abdullah bin Abbas said, - while narrating the lengthy Hadith about the delegation of Bani Abdul Qays - that the Messenger of Allah said to them,

Do you know what it means to believe in Allah?

Testifying that there is no deity worthy of worship except Allah and that Muhammad is the Messenger of Allah,

Therefore, the Messenger listed surrendering one-fifth of the war booty as part of faith. This is why Al-Bukhari wrote a chapter in his Sahih entitled, "Chapter: Paying the Khumus (one-fifth) is Part of Faith.'' He then narrated the above Hadith from Ibn Abbas.

on the Day of Criterion, the Day when the two forces met; and Allah is Able to do all things.

Allah is making His favors and compassion towards His creation known, when He distinguished between truth and falsehood in the battle of Badr. That day was called, `Al-Furqan', because Allah raised the word of faith above the word of falsehood, He made His religion apparent and supported His Prophet and his group.

"Badr is Yawm Al-Furqan; during it, Allah separated between truth and falsehood.''