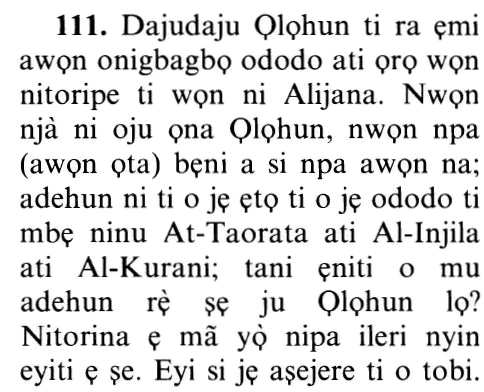 (Lo! Allah hath bought from the believers their lives and their wealth because the Garden will be theirsﾅ) [9:111]. Muhammad ibn Kab al-Qurazi said: ﾓWhen the Helpers ﾗ seventy in number ﾗ swore allegiance to the Messenger of Allah, Allah bless him and give him peace, at al-Aqabah in Mecca, Abd Allah ibn Rawahah said: O Messenger of Allah, stipulate anything you wish with regard to your Lord and to yourselfﾒ. He said: As for my Lord, I stipulate that you worship Him and not associate anything with him; and I stipulate for myself that you defend me from that which you would defend yourselvesﾒ. They said: What do we get if we were to do this?ﾒ He said: The Garden!ﾒ they exclaimed: This is a prosperous transaction; we will not revoke it nor will we resign itﾒ. And so this verse was revealedﾔ.

Verily, Allah has purchased of the believers their lives and their properties for (the price) that theirs shall be the Paradise.

Allah states that He has compensated His believing servants for their lives and wealth -- if they give them up in His cause -- with Paradise. This demonstrates Allah's favor, generosity and bounty, for He has accepted the good that He already owns and bestowed, as a price from His faithful servants.

"By Allah! Allah has purchased them and raised their worth.''

"There is not a Muslim but has on his neck a sale that he must conduct with Allah; he either fulfills its terms or dies without doing that.''

He then recited this Ayah.

This is why those who fight in the cause of Allah are said to have conducted the sale with Allah, meaning, accepted and fulfilled his covenant.

They fight in Allah's cause, so they kill and are killed.

indicates that whether they were killed or they kill the enemy, or both, then Paradise will be theirs.

The Two Sahihs recorded the Hadith,

Allah has made a promise to the person who goes out (to fight) in His cause; `And nothing compels him to do so except Jihad in My Cause and belief in My Messengers.'

He will either be admitted to Paradise if he dies, or compensated by Allah, either with a reward or booty if He returns him to the home which he departed from.

It is a promise in truth which is binding on Him in the Tawrah and the Injil and the Qur'an.

And who is truer to his covenant than Allah,

affirming that He never breaks a promise.

Then rejoice in the bargain which you have concluded. That is the supreme success.

meaning, let those who fulfill the terms of this contract and uphold this covenant receive the good news of great success and everlasting delight.