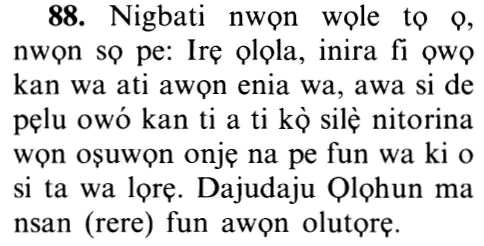 Yusuf's Brothers stand before Him

Then, when they entered unto him,

when they went back to Egypt and entered upon Yusuf,

because of severe droughts and the scarcity of food,

and we have brought but poor capital,

means, `we brought money for the food we want to buy, but it is not substantial,' according to Mujahid, Al-Hasan and several others.

Allah said that they said next,

so pay us full measure,

meaning, `in return for the little money we brought, give us the full measure that you gave us before.'

Ibn Mas`ud read this Ayah in a way that means,

"So give the full load on our animals and be charitable with us.''

"So be charitable to us by returning our brother to us.''

And when Sufyan bin Uyaynah was asked if the Sadaqah (charity) was prohibited for any Prophet before our Prophet, he said,

"Have you not heard the Ayah,

so pay us full measure and be charitable to us. Truly, Allah does reward the charitable.''